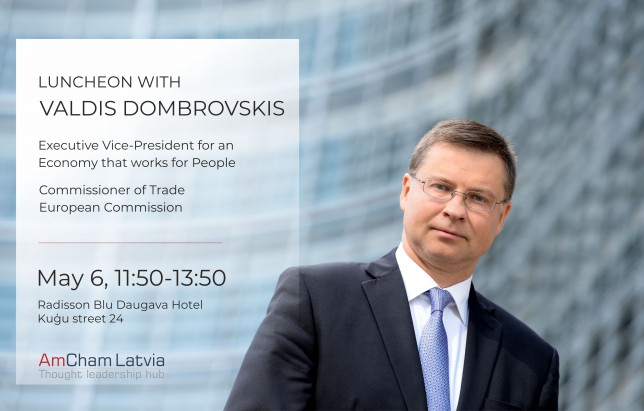 On May 6, members had an exclusive opportunity to meet Valdis Dombrovskis, Executive Vice President of the European Commission at the Radisson Blu Daugava Hotel. When addressing members he pointed out several topical issues that EU is currently facing such as the geopolitical impact on the supply chain disruptions, sanctions against Russia and their impact on Europe, promotion of EU-U.S. trade investment flows as well as the priority areas of the EU-U.S. Trade and Technology Council.

According to Mr. Dombrovskis the EU has moved fast in terms of response to the war in Ukraine and sanctions against Russia by working closely with the United States and other like-minded partners. He emphasized that currently, EU Member States are working on the sixth package and the Commission is also working on establishing a Ukraine Solidarity Trust Fund, which will be dedicated to rebuilding Ukraine, together with Ukrainians.

He expressed gratitude to Latvian and American companies for their support and for their willingness to take action on leaving the Russian market, putting profits after values, and he suggested others follow this example.

Valdis Dombrovskis is the Executive Vice-President of the European Commission responsible for an economy that works for people. His portfolio involves preserving and improving financial stability, building a future-ready economy that delivers jobs, growth and investment, strengthening the role of the euro, and putting social rights, protection and fairness at the heart of our modern economy. From 2020 he is also the European Commissioner for Trade.

Mr. Dombrovskis served as Vice-President of the European Commission from 2014 to 2019, responsible for the Euro and Social Dialogue, and in charge of Financial Stability, Financial Services and the Capital Markets Union. Before that, he served three consecutive terms as Prime Minister of Latvia, becoming the longest-serving elected head of government in Latvia’s history.

Before becoming European Commission Vice-President, Valdis Dombrovskis was elected for the second time as a Member of the European Parliament and Head of the Latvian Delegation in the EPP Group. He served as a Member of the Saeima and was Latvia’s Minister of Finance from 2002 to 2004.

Prior to joining politics, he worked as a senior economist and Chief Economist at the Bank of Latvia (1998-2002). Together with Anders Aslund, he co-authored the book "How Latvia came through the financial crisis” in 2011.

In November 2014, Valdis Dombrovskis was awarded the Order of the Three Stars, the highest State Decoration of the Republic of Latvia.