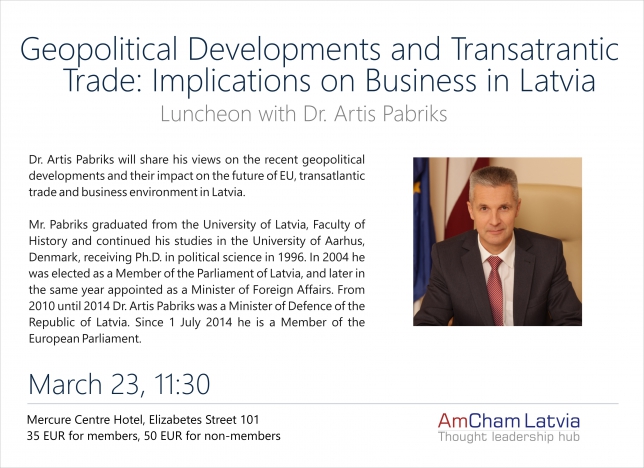 On February 23, the second business lunceon of 2017 took place. AmCham members and guests were addressed by Dr. Artis Pabriks, Member of the European Parliament. Mr. Pabriks shared his views on the recent geopolitical developments and their impact on the future of EU, transatlantic trade and business environment in Latvia. What can we expect in the months and years to come? What is the role of the business community and business organizations in these circumstances? These and other questions were discussed at the meeting.
Mr. Pabriks addresses AmCham members and guests in the video below:
Dr. Artis Pabriks
Member of the European Parliament, Latvia
Dr. Artis Pabriks graduated from the University of Latvia, Faculty of History and continued his studies in the University of Aarhus, Denmark, receiving Ph.D. in political science in 1996. As an academician, the main fields of his research activity are political theory, ethnic policy, multiculturalism, foreign and security policy. He is also the author and co-author of numerous publications on the previously mentioned topics.  In 1996 Dr. Artis Pabriks became the first Rector of Vidzeme University College, later becoming a professor there. He has worked also as a policy analyst and researcher in several NGOs.
In 2004 Dr. Artis Pabriks was elected as a Member of the Parliament of Latvia, and later in the same year appointed as a Minister of Foreign Affairs. He served as a Minister until 2007. From 2007 until 2010 he was a Member of the Parliament. Since 2010 Dr. Artis Pabriks is a professor at Riga International School of Economics and Business Administration. From 2010 until 2014 Dr. Artis Pabriks was a Minister of Defence of the Republic of Latvia. Afterwards for half a year he became a Member of the Parliament. Since 1 July 2014 he is a Member of the European Parliament.