AmCham calls to invest in health 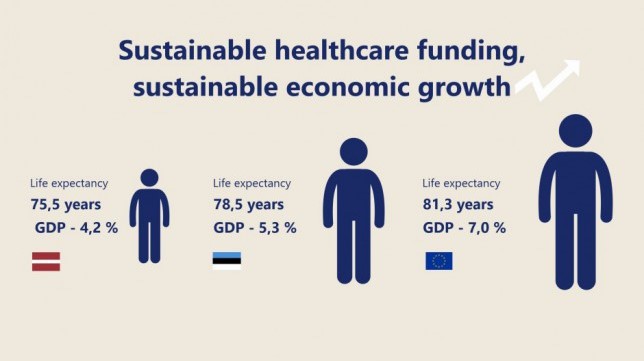 On October 7, AmCham released a position statement calling for sustainable investments in healthcare. In order to increase public funding for healthcare AmCham proposes to consider linking the healthcare budget to the GDP growth and providing the necessary funding for the fight with oncological diseases.

According to AmCham President Zinta Jansons: “Availability of talent and human capital is one of the key factors in attracting investment and economic growth. It is necessary to provide human resources that are healthy and able to work with modern skills. Latvia's demographic situation in recent decades has been critical and has become not only a factor holding back the economy, but also a direct threat to the country's sustainability. Although there have been some improvements in recent years, in the face of rapid population decline, more and better targeted public investment in healthcare is needed to increase life expectancy and life quality and reduce disability and chronic illness.”

AmCham stresses that the healthcare budget in 2022 is planned to form 4.51% of the GDP, significantly lagging behind the European Union’s and OECD average of 7.0% and will not be sufficient to cover all the needs accumulated over the years. In comparison with our neighboring countries, public investment in health in the same period was more than 48% in Lithuania (6.2% of GDP) and by 26% more in Estonia (5.3% of GDP).  According to the calculations of Olegs Krasnopjorovs, Economist of the Bank of Latvia, by prioritizing investments in healthcare since 2000, the country would have 60,000 more inhabitants, 4,000 lives would be saved every year, and there would be 40,000 more people of working age, which would promote faster economic growth, providing 0.2% GDP growth every year, as a result of which the GDP in Latvia would be by 4% higher than it is now.

AmCham indicates that oncological diseases is the second most common cause of death in Latvia, and mortality from oncological diseases in the economically active age group has not significantly improved in the last decade. During this period, 175,952 life years have been lost, causing Latvia a GDP loss of EUR 2.174 billion as unearned GDP at current prices in the respective year from 2010-2020. Moreover, by the losses incurred by the group of working age population, GDP losses over 10 years are estimated in amount of EUR 4.8 billion, thus causing a negative impact on the economy and outlining risks to Latvia's sustainable development.

AmCham believes that a sustainable and predictable state budget for healthcare will ensure the preservation of the health of the population and the growth of quality-adjusted years, thus promoting employment and economic competitiveness of Latvia.