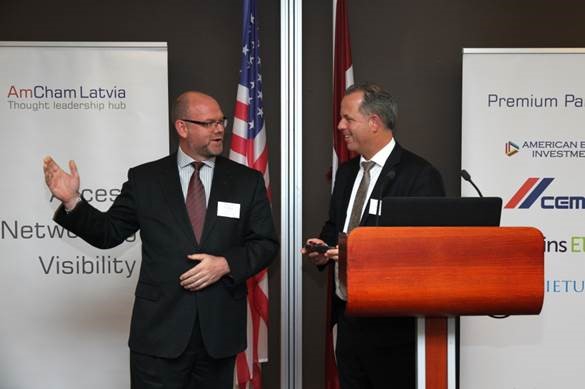 American Chamber of Commerce in Latvia is pleased to welcome Air Baltic Corporation as our new Corporate member! Air Baltic is a Latvian company, but it is definitely an important link from the Baltics to the rest of the world. The company will be represented in Chamber by Jānis Vanags, Vice President Corporate Communications.

Air Baltic Corporation AS (airBaltic) is duly incorporated joint stock company under the laws of the Republic of Latvia on 8 February 1995. Its primary shareholder is the Latvian state, which holds 80.05% of the stock, while Ralf-Dieter Montag-Girmes holds around 20% through his fully-owned Aircraft Leasing 1 SIA. The airBaltic fleet currently consists of 24 aircraft - five Boeing 737-500, seven Boeing 737-300 and twelve Bombardier Q400Next Gen. Yesterday, the first Bombardier CS300 planes joined the airBaltic fleet. Outstanding performance, admirable efficiency and maximum comfort - these are just some of the characteristics that speak for the capabilities of the CS300.

CEO of Air Baltic Corporation addressed AmCham members on recent developments in the company four times during last six years. The company has also been an active supporter of AmCham charity raffles.