AmChams in Europe launch The Case for Investing in Europe 2015 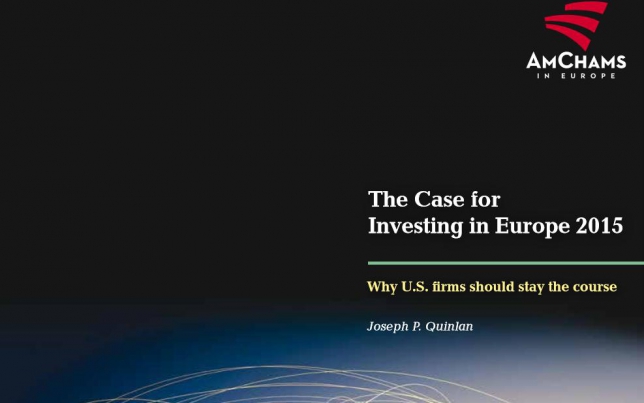 AmChams in Europe launch the 2015 Case for Investing in Europe during its annual USA Conference in late May. The report by Joseph Quinlan, Fellow at Johns Hopkins, shows that the transatlantic partnership is critical to the long-term health of the global economy and that Europe remains the most profitable region in the world for U.S. companies.

In a world in perpetual change, one truss of continuity remains the deep integration of the United States and Europe. It is Europe's size and wealth, depth in human capital, and respect for the rule of law, among other attributes, that makes the region a natural partner of the United States.

Notwithstanding some formidable challenges, Europe still remains among the most attractive long-term places in the world for business.

Why Europe still matters
Neither the United States nor China is the largest economy in the world. That title belongs to the European Union-a fact often overlooked or ignored by the common consensus.

What's right with Europe
The weak link of the global economy is becoming stronger-indeed, much stronger than anyone expected as 2015 unfolds. Defying the sceptics, real growth in Europe is accelerating and expected to average 1.5 - 2% over the near term.

Europe is not only among the largest economic entities in the world, it is also among the wealthiest. It is Europe's size and wealth that sets the region apart from many other parts of the world, the United States included.

Europe's periphery remains attractive
Large, wealthy and competitive - these key attributes underpin the attractiveness of the European Union to Corporate America. However, another item should be added to the list: Europe's large and expanding economic periphery.

Europe's extended periphery, which encompasses not only central and Eastern Europe, but also Turkey, the Middle East, North Africa and the Sub-Saharan Africa, represents one of the largest and most promising components of the global economy.

TTIP: A potential global game changer
The Transatlantic Trade and Investment Partnership (TTIP), currently under negotiation by the United States and the EU, promises to unleash significant opportunities to generate jobs, trade and investment across the Atlantic.