AmChams in Europe hold annual conference in the US 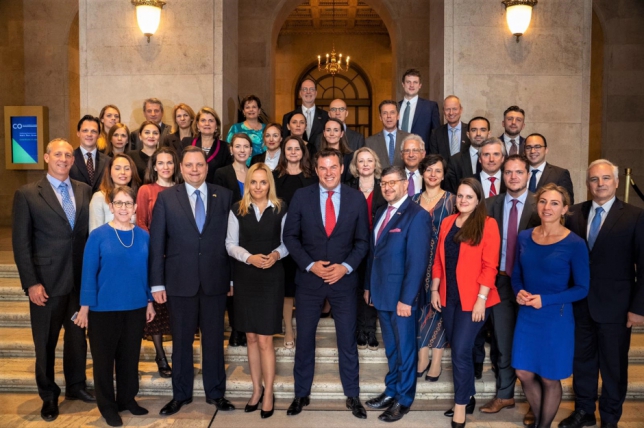 The 35-member delegation from 30 AmChams across Europe and Eurasia gathered in Washington, DC and Seattle for AmChams Annual US conference May 12-17, 2019. The purpose of the conference was to engage with different stakeholders, ranging from private companies, international organizations to key government agencies. The primary goal of the conference is to strengthen cooperation and partnerships as well as to provide the participants with timely insights into the current US business and political climate through a series of high-level briefings with administration officials and senior practitioners.

The delegation then continued their journey to Washington state on the west coast. They first stopped in Everett and visited the Boeing factory, the largest factory in the world, which develops advancements in the aviation industry. They then visited Seattle, a city known for having two of the world's three trillion-dollar companies. They first visited Accenture, which employs half a million people around the world. The representatives identified the most important areas of future development. The main message of the meeting was that Europe is lagging significantly behind the USA and China in terms of digital development, and that it is important who develops the values for tech and how they are developed, as technology is neither good or bad, but people have to decide how it is used.

At BCG, the delegation was presented with an excellent example of public-private partnership, and learned how business leaders, who have to ensure the development of their companies, are very important to the development of society, but that this is meaningless without the development of the community and society. Amazon, whose campus dominates the city, and at which 45,000 of the company's 680,000 employees work, welcomed them into one of the most unusual corporate facilities in the world, Amazon Spheres, which houses a tropical garden. They also visited the University of Washington, which is known for having excellent connections between science and the business world. They finished their official working visit by visiting Microsoft headquarters in Redmond, where they discussed the importance of the ethical use of artificial intelligence and the importance of cybersecurity. They also learned about the latest technological development trends in trade, agriculture, public administration, energy and other areas.

The delegation saw the conference as extremely successful, as they had the opportunity to learn about both political and economic trends and events, and one of the main messages they brought back from the US is that cooperation, mutual respect and awareness of values is extremely important, and that Europe has to stay connected if it wants to keep up with other countries.