AmChams in Europe meets in Washington DC and Raleigh 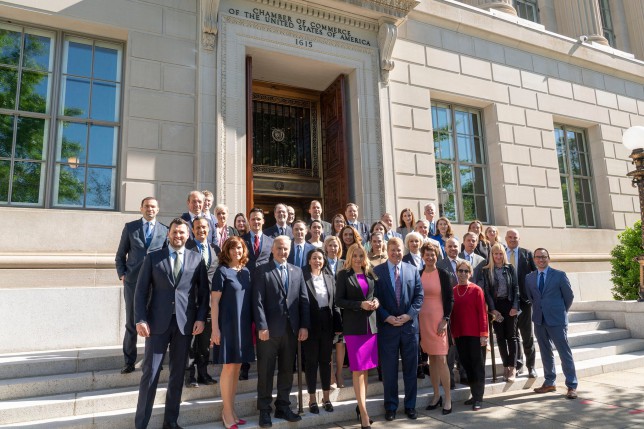 An executive delegation consisting of more than 30 executives and other AmCham representatives of AmChams in Europe (ACE) joined the annual 2022 U.S. Conference between May 9-13.

They visited the U.S. capital, Washington D.C., and Raleigh, North Carolina to discuss policy with leading representatives of the U.S. administration, including the U.S. Chamber of Commerce, the U.S. Department of Commerce, the Department of State, and Congress. In North Carolina, they also visited some of the most prominent companies and met with business leaders, such as the president of Epic Games and the founder of the SAS Institute. With its accelerators and universities, Raleigh represents a compelling ecosystem of science and business, enabling a symbiotic transfer of knowledge between them.

The delegation set its primary focus on the transatlantic economy and trade, current political developments, and the Russian-Ukrainian war. In meetings with experts on politics and business, the ACE representatives also discused energy, finance, and digital policies. Jointly with the U.S. Department of Commerce, AmChams in Europe announced the cooperation in the Empower Her initiative, which aims to uphold the position of women in the economy.

AmChams in Europe is an umbrella organization of American chambers of commerce (AmChams) that acts as the voice of more than 17 000 companies in Europe and Eurasia. Its annual conference in the USA serves to gain insight into the latest trends in policy and business.