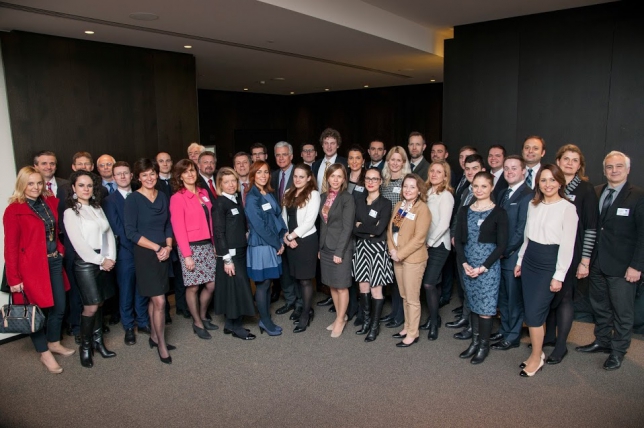 The Briefing emphasized the importance of the AmChams in Europe network and in particular the cooperation and coordination on policy among the Chambers. The Briefing program included several sessions on many policy areas including digital, environment, energy, healthcare and investment to just name a few.

The Briefing also included a Roundtable discussion on TTIP which featured the participation of the European Commission and the US Mission to the EU. The Roundtable also provided an opportunity for Chambers to highlight some of the projects and advocacy they have been engaged in at the local level. Other highlights of the Briefing were a presentation on the EU's top priorities by Louise Harvey, the visit to the Google Europe office and the closing lunch with the Editor-in-Chief of soon to be launched Politico Europe. Overall, the Briefing provided a great opportunity to exchange ideas and best practices among the Chambers and to plan more joint advocacy.

At the reception to kick off Transatlantic Week on Wednesday evening, Jean-Luc Demarty, Director General of DG Trade at the European Commission, delivered remarks on the significance of EU-US trading relations to the European economy. At the reception Joseph Quinlan of the Johns Hopkins University introduced the Transatlantic Economy 2015 surveying jobs, trade and investment between the US and EU. The report showed that since the financial crisis, the United States and Europe have embarked on divergent economic paths. The U.S. economy is now in its sixth year of recovery while Europe struggled in 2014 to avoid a triple-dip, or a third recession in six years, with real growth at 0.9% versus 2.4% in the United States. The IMF predicts this gap to widen in 2015. The full report can be viewed here.

At the conference on Thursday, US Ambassador to the EU Anthony L. Gardner and Dara Murphy TD, Irish Minister for European Affairs and Data Protection, delivered keynote addresses on the longstanding importance of transatlantic relations and the opportunity to deepen these ties through TTIP. Thought-provoking and productive debates were then held on key issues related to the transatlantic economy: The Digital Market, Energy Cooperation and Energy Security, Healthcare in TTIP, and Financial services.

Key themes that emerged from these debates included the significance of strengthening EU-US economic and strategic relations in a time of increased globalization, the growth of emerging markets in Asia and Africa, and sluggish growth in Europe. Panelists and participants discussed the gains and opportunities that TTIP in particular could offer to boost the transatlantic economy and enhance its position as the most integrated economic relationship in the world.