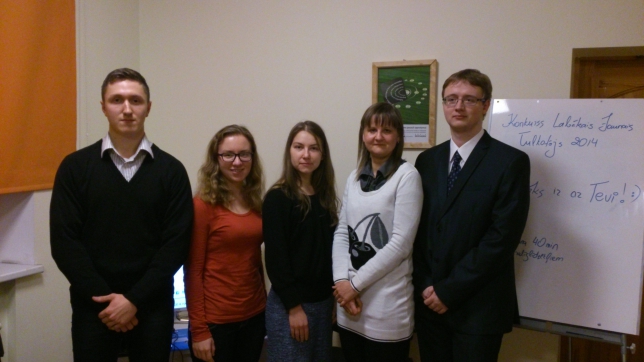 On 5 December, 2014, the annual Best New Translator 2014 competition for Latvian students organised by the international language company Skrivanek Baltic was completed, and this year's winner was Ieva Aleksandrova, a specialist in the English language, 2nd year student of the study programme "Written Translation" of the University of Latvia.

The Best New Translator competition has been organised for the seventh year in a row already and this year 46 applications were received. 16 candidates participated in the second stage of the competition - translating without auxiliary materials, where texts from the English, German, French languages were translated into the Latvian language. The competition was held in close cooperation with nine higher education establishments in Latvia: Turiba University, Daugavpils University, University College of Economics and Culture, the Latvian Academy of Culture, University of Latvia, Liepaja University, Riga International School of Economics and Business Administration (RISEBA), Riga Technical University and Ventspils University College.

"The Best New Translator competition has become a significant tradition that, already for the seventh year, gathers young people with excellent knowledge of foreign languages from all regions of Latvia. We are happy that this year Turiba University, Liepaja University and Riga International School of Economics and Business Administration (RISEBA) also joined this initiative. It shows a growing interest in foreign languages and pursuing a professional career as a translator and interpreter among the youth," explains Skrivanek Baltic Executive Manager Vasilijs Ragačevičs.