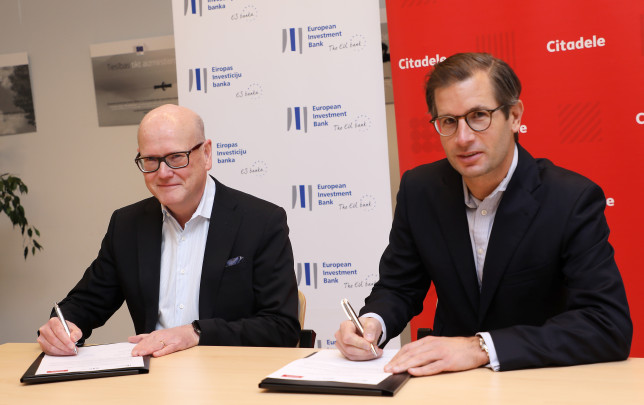 The EIB Group, consisting of the European Investment Bank (EIB) and the European Investment Fund (EIF), has issued a guarantee to AS Citadele banka (Citadele banka) to support new lending to companies based in all three Baltic States. The Group’s first agreement with Citadele banka, the deal will provide capital relief for the bank and enable it to grant at least €460 million in additional loans and leases to businesses in the Baltics over the next three years. Against the uncertainty of the current economic climate and geopolitical situation, the agreement is especially welcome and affirms EIB Group’s status as a countercyclical investor.

With 20% of the lending geared towards green projects, the deal will help propel the green transition of local economies and reduce overall greenhouse gas emissions. In parallel, Citadele banka will receive advisory support under the Green Gateway facility through the European Investment Advisory Hub in the form of training, development of tools and manuals and on-the-job-support to enhance its capacity to identify, assess and report on green projects.

Citadele banka CEO Johan Akerblom explained, “We see that Baltic business clients are willing to continue their development plans, and this deal will support our capacity to provide the required financing to these customers in the upcoming years, with a particular focus on supporting the green transition.”

“We at the EIB are delighted to sign this agreement with Citadele banka that will help expand lending to local businesses in the Baltic States,” said EIB-Vice-President Thomas Östros. “Small businesses and mid-caps are a key part of the economy, and we are deeply committed to improving their access to finance and supporting the development of capital markets in the region. We look forward to supporting many more small and medium-sized companies in Estonia, Latvia and Lithuania.”

EIF Chief Executive Alain Godard remarked, “The EIF is very pleased to be working with Citadele banka and the EIB to provide additional access to finance for SMEs in the Baltics. The combination of the EIF’s investment and structuring expertise and the EIB’s own funds deployment will boost the supply of finance in the region, which will allow thousands of European companies to invest in their growth and development in the medium to long-term.”

The operation is the EIB Group’s second securitization transaction in the Baltic States. The first agreement supported at least €660 million in additional loans and leases to SMEs and mid-caps in all three Baltic countries.