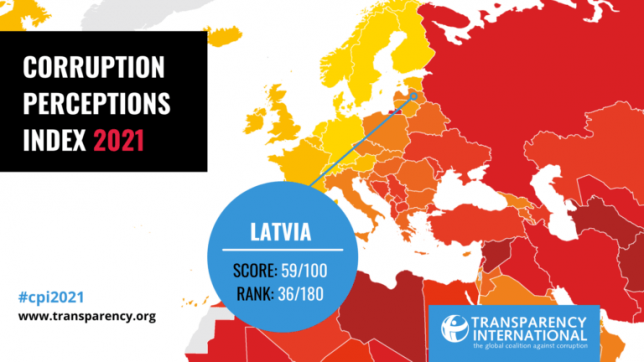 Transparency International (TI) has published the annual results of the Corruption Perceptions Index (CPI) for the year 2021. Latvia’s score has increased by 2 points compared to 2020, rising to 59 out of 100. Although the result has improved, Latvia’s CPI results have long lagged behind those of other EU and OECD countries. Moreover, this increase does not inspire confidence that the target of 64 points in 2024 and 67 points in 2027, as set in the National Development Plan 2021-2027, will be achieved. Transparency International Latvia chapter Delna points out that in order to improve Latvia’s performance in the Index, the responsible institutions need to act decisively and stop delaying decisions and improvements in areas such as preventing waste of public resources and the promotion of political and business integrity, while the private sector must also step up its role in the fight against corruption.

The 2021 CPI results show that Latvia’s score, which now stands at 59, has improved by two points since last year. Nevertheless, it must be taken into account that this score still lags behind other EU and OECD countries. According to the 2021 results, the EU countries’ average CPI score is 64, placing Latvia 15th out of 27 countries (17th in 2020). By contrast, the OECD average CPI score is 67, ranking Latvia 26th out of 37 countries (28th in 2020). Latvia is ranked 36th in the world (42nd in 2020), along with Israel and the Caribbean Island group of St Vincent and the Grenadines.

According to Delna, Latvia’s recent performance in the CPI needs to be viewed in the context of much longer changes. Since 2012, Latvia’s CPI score has increased by 10 points, illustrating a positive long-term trend. While Estonia has also seen a 10-point increase since 2012, it is important to note that Estonia’s score was initially 15 points higher. Meanwhile Lithuania’s score has increased at a slower pace (+7 points). Thus, the trajectory taken by Latvia is generally promising, although the pace of change is not sufficient to place it among the top contenders in this race and not conducive to achieving its own set targets (i.e., according to the NDP, to reaching 64 points in 2024 and 67 points in 2027, which are comparable to the EU and OECD averages in 2021).

Inese Tauriņa, Executive Director of Delna, explains: "The analysis of the 2021 Corruption Perceptions Index clearly shows that Latvia’s weaknesses lie in political and private sector integrity, as well as in preventing waste of public funds and in distrust regarding the fair use of public funds, including EU funding. But we should not forget other areas, such as the prosecution and adjudication of corruption cases, where improvements are still needed. We already highlighted this as a critical area last year in our analysis of the 2020 Index results, and we can already see that Latvia has made a number of improvements, the impact of which on the CPI is likely to be seen in the coming years. It should also be borne in mind that the Corruption Perceptions Index score is one of the first indicators that foreign investors look at before starting their business in a country. Improving this indicator is therefore a long-term effort, involving not only formal improvements on paper, but also the ability to implement these changes in practice."