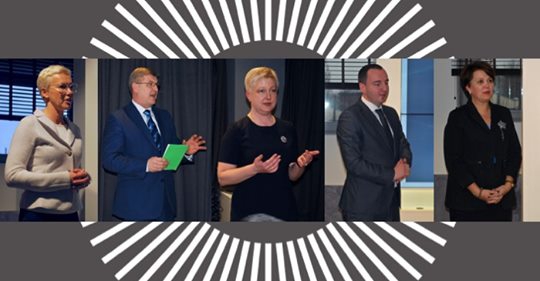 On 21 February, Foreign Investors' Council in Latvia (FICIL) held its annual general meeting where new Executive Board was elected. Two newcomers to the FICIL Board in 2020 are Valts Kārkliņš, Large Business Customer Director at BITE Latvia, and Zlata Elksniņa-Zaščirinska, Country Managing Partner and Chairperson of the Board at PwC Latvia, who has previously served both as a Board member and Chairperson of FICIL. Gunta Jēkabsone, Vice President and Executive Director at Circle K Latvia, Māris Gruzniņš, Board member and Commercial Director at Schwenk Latvia, and Ilze Zoltnere, Head of Corporate Banking at Luminor Latvia, were re-elected to the Board for another term.

Three Board members will continue their work as part of the FICIL Executive Board - Ints Krasts, Board member at SEB Latvia, Iain Kennedy, CEO of BALTA Insurance Company and Arnis Sauka, Professor and Director of the Centre for Sustainable Business at SSE Riga.

The FICIL Executive Board is elected for a two-year term and its main responsibility is to develop and strategically guide the work of FICIL. The first Executive Board meeting will be held on 4 March where the Board members will elect the Chairperson and two Vice-Chairmen and start the preparations for the annual High Council meeting. The 24th FICIL High Council will be held on May 28 and 29.

Linda Helmane, FICIL Acting Executive Director: "The previous year was full of changes and important milestones for FICIL - we celebrated FICIL's 20th anniversary together with our partners and stakeholders, held the 23rd High Council meeting with the Government, launched the 5th FICIL Sentiment Index report. We will continue to engage in a constructive dialogue with the Government and public sector to promote positive change in the business environment in Latvia. Issues such as labour availability and productivity, quality of higher education, developing a digital economy, combating the shadow economy, stability of tax system, etc. remain at the top of FICIL's agenda."