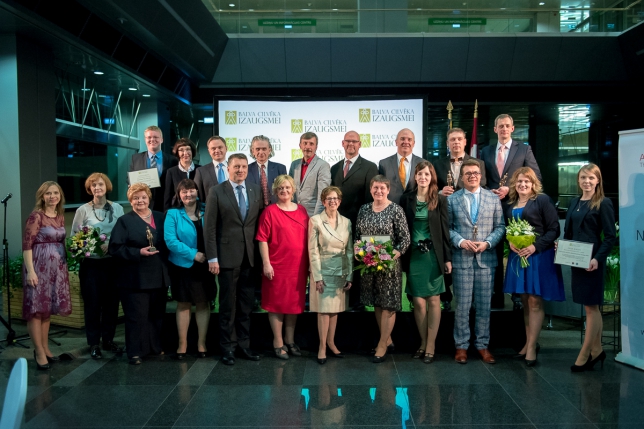 The winners received custom-made sculpture "Sprout" designed by artist Olga Silova, an Award certificate and other special prizes by the program partners and sponsors. The U.S. Embassy awarded Zigmunds Zalenko, Children's Palliative Care Society and TechHub Riga with a grant worth 0 to be put towards the organizations' future projects. AbbVie gave their certificates of appreciation to the Children's Palliative Care Society, Society "AGIHAS" and Latvian Cancer Patient Support Society "Dzīvības koks". The Civic Alliance of Latvia presented its award to the Children's Palliative Care Society and association "Karosta Kids". The Minister of Health Guntis Belēvičs presented a certificate of appreciation on behalf of the Ministry of Health to the Latvian Cancer Patient Support Society "Dzīvības koks". Supporters of the program Jerry and Denise Wirth gave presented a special monetary prize of EUR 3000 to the association "Karosta Kids". All finalists received special prizes from Microsoft Latvia.

Overall 63 nominations, an all-time highest number, were received from across Latvia. The following finalists in the following four categories were selected:

Find out more about all finalists here: http://ej.uz/HDAfinalists.

The video of the ceremony is available here: http://ej.uz/HDAvideo.

The American Chamber of Commerce in Latvia (AmCham) together with the U.S. Embassy in Latvia and the Civic Alliance of Latvia held the Human Development Award for the 3rd consecutive year to honor inspirational people, businesses and organizations of Latvia who have significantly contributed to human development. The award aims at promoting initiatives that reduce inequality, foster social responsibility, enhance education, health and well-being of the Latvian people and the future development of Latvia.

Joining as the keynote speakers were HE Raimonds Vējonis, President of Latvia and Patron of the Human Development Award, Nancy Bikoff Pettit, the U.S. Ambassador to Latvia and Nils Muižnieks, the Council of Europe's Commissioner for Human Rights.

Patron of the Human Development Award, President of Latvia, HE Raimonds Vējonis said: "The works of the nominees of the Human Development Award of Latvia include many significant areas for Latvia in the long-term: education, healthcare, entrepreneurship, development of technologies, social equality, diaspora. I am truly pleased that we may share Latvia's success stories and achievements of people who take inititative and pursue interesting, useful and significant projects for the society and for the development of their country."

The U.S. Ambassador to Latvia, Nancy Bikoff Pettit said: "As we celebrate tonight, we must remember that Latvia's achievements do not come easy, nor are they a guarantee of future success. It takes hard work and dedication, as demonstrated by the honorees tonight. They are fighting for our nations' shared values, for a better tomorrow, and helping to secure this country's future."

Nils Muižnieks, the Council of Europe's Commissioner for Human Rights said: "When I was asked to define human development I thought of a development that is related to people. I very much like the focus on the individual in this program because it is based on human rights approach emphasizing that every person is born equal, in dignity and law."

The Human Development Award was sponsored by Hamid Ladjevardi and family, Abbvie, Bikkel Group and Klavins Ellex. The Award was supported by Jerry and Denise Wirth, Latvian National Library and Microsoft Latvia. It was supported by media partners IR, Latvijas Radio, Leta, LSM.lv and the Baltic Times.