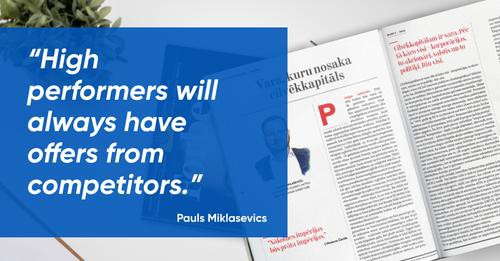 Read the latest article by our Vice President, Pauls Miklasevics for Forbes Latvija about the triumph of human capital and what it could mean for Latvia's future.

Frederick the Great of Prussia was one on the most influential leaders of the 18th century. He was the apotheosis of an ‘enlightened despot’ – an absolute ruler that sought to direct the advancement of his subjects through his own beneficence and adherence to the humanist ideals of the Enlightenment. During his reign Prussia was among the first countries in the world to implement compulsory education for children (based on the Generallandschulreglement decree of 1763). Prussian youth of all social classes were taught the foundational skills of a modernizing world – namely reading and writing. They were also taught singing and received religious instruction, as the church was very much involved in the education of young Prussians, ever mindful to instill in them a strict adherence to discipline, duty and compliance. For the sake of comparison, Britain and France did not institute compulsory education until the 1880s, over a hundred years after Frederick’s decree.

While the education of the country’s youth certainly appealed to the proponents of the Enlightenment, the rigorous discipline that was demanded in Prussian schools played directly into Frederick’s other formative passion: military conquest. How better to prepare your citizens for combat than to instill discipline and a deference to authority at a young age? This was especially important given the combat tactics of the day wherein victory heavily favored the side that did not break ranks in the face of gunfire and obeyed orders.

Although the modern world still owes a considerable debt to the humanist ideals of the Enlightenment, we have, thankfully, come a considerable way from the concept of human capital as cannon fodder. In fact the dynamic between monarchs and human capital has been completely inverted. In our day, human capital, not royalty, is the most powerful enabler of wealth and prosperity. The companies that have been most successful in leveraging human capital have created wealth that would exceed the wildest dreams of any monarch in history, Frederick the Great included.

Human capital reigns supreme. And everybody wants it. Companies, their shareholders, countries, their politicians. Everyone.

Why does everyone want human capital? Well, human capital is the foremost component and creator of intangible assets. Intangible assets make up the majority of the market capitalization of the most successful companies on Earth. This is because ideas are scalable and can grow exponentially. Unlike physical goods, they are not constrained by unit cost, and therefore benefit from massive economies of scale. In his insightful book “Exponential” Azeem Azhar makes the point that “in 1975, about 83% of the market value of companies on the Standard and Poor 500 stock market index comprised of tangible assets. Intangible assets accounted for the remaining 17 percent. By 2015, those proportions had reversed”.

He goes on to state that in 2019, the five largest ‘Exponential Age’ companies – Apple, Google (Alphabet), Microsoft, Amazon and Tencent – had traditional assets that comprised only 6% of their combined stock market value of .5 trillion. With the exception of Tencent, the market value of these companies has continued to rise exponentially to this day.

Given our lack of notable industrial resources such as hydrocarbons and metals, Latvia should be thrilled that intangible assets are valued so highly in the modern economy.

And it seems that we are. But what are we actually doing to raise our human capital – the foremost driver of intangible assets and creator of wealth?

I have the honor to serve on the board of directors of the American Chamber of Commerce in Latvia. Our members are some of the largest and most influential companies on Earth and are also key contributors to the economic prosperity of Latvia. It should come as no surprise that the development of our country’s human capital is one of AmCham’s most important policy initiatives.

The most sought after skills for AmCham’s members are digital skills at all levels, most notably: data management and technical skills. Leadership skills, change management and strategic planning are also high priorities.

Unfortunately, our member feedback in an ongoing study conducted in partnership with the OECD revealed that we do not have a very conducive environment for companies to invest in developing these skills for their workers. It turns out there is a lack of incentives and insufficient risk mitigation for companies to direct considerable financial resources towards their employee development.

The first component of this dynamic is that the government offers little support in the form of tax incentives for upskilling employees. This is troublesome and points to us having to take a more serious look at emulating best practices in terms of private-public cooperation for skills development in other countries.

The second element of apprehension is that there is a considerable potential sunk cost in terms of upskilled employees being able to potentially move on to more lucrative employment elsewhere after having been upskilled by their former employer.

While public/private partnerships must certainly be nurtured, talented and upskilled employee mobility is not something that we should seek to constrain. Rather, we should do everything we possibly can to embrace and encourage this inevitable process. We need to learn from it and use it to our advantage, not hold it back.

High performers will always have offers from competitors.

It should come as no surprise that there are some multinational companies in Latvia that do not want any exposure or publicity about their operations in our country because they afraid that it would make them more susceptible to having their employees lured away elsewhere.

Human capital – everyone wants it.

This is why the companies that do invest in human capital and upskilling work just as hard to create a culture that keeps their high achievers motivated and content.

My job is to invest money for my clients. I deploy their capital into different companies, industries and countries. And there is one thing that you can never forget about capital: it flows more readily there where it is treated best. Yes, you can sometimes find opportunities where risks are offset by the prospect of outsized returns, but capital likes to follow the path of least resistance. This is why the US has the largest stock market on Earth – it offers investors access to the world’s most dynamic companies, has a massive skilled workforce and protects investor interests by trying to ensure fair operating environment.

If you are excellent at what you do and have many potential options, why would you actively choose to go somewhere difficult? Why would you not go to where you are treated well and where there is the most competition for your services as well as the highest compensation?

Let us turn this perspective around: if we are not doing our absolute best to create and attract the brightest, most promising human capital, then what are we settling for, and what is ultimately the long term opportunity cost?

Let me visualize this concept: are we a hostel or five star resort? What sort of human capital are we ready to receive or train?

Hostels offer basic accommodation, but five star hotels offer a standard of service and attention that anticipates their guests’ needs at every turn.

I was born and grew up in Toronto, Canada. At present, over half of Toronto’s population was born outside of Canada. That is a pretty incredible statistic. Toronto’s ascendance has been impressive to behold, but it is not alone. It should come as no surprise that the most dynamic cities on Earth attract the largest influx of immigrants. If you look at the cities with the largest foreign-born populations, they are the most economically and culturally vibrant cities on earth: London, Paris, New York, Singapore, Sydney. This begs the following questions: do successful cities attract a large amount of immigrants, or do large immigrant populations enable successful cities? There is no point in trying to separate these questions. They are bound together.

Latvia has a tremendous amount of capital: natural, cultural, intellectual, but we need to lessen the path of resistance for financial and human capital. This means paying attention to all the elements necessary to create, attract, and, just as importantly, retain human capital, while also encouraging financial capital to want to invest here.

It means paying attention to details – nurturing and forming impressions, and showing a commitment to wanting to be excellent, not just go through the motions or pay lip service.

I cannot count the amount of times that I have researched a company that seemed to have everything going for it, but one or two factors undermined their success. We cannot afford to allow for these kinds of oversights in our attempt to attract capital – both human and financial.

And sometimes the easiest way to give yourself a chance to win is to avoid doing things that put you at a significant disadvantage before you even have the chance to compete. The foremost actionable example of this concept is our current double taxation of dividends for foreign investors.

Let’s take a look at our Foreign Direct Investment (FDI) data in comparison to Estonia and Lithuania.

There are several possible attributable causes for this underperformance, but one that is blindingly obvious is a change in our tax policy that resulted in double taxation of dividends for foreign investors in 2018. As a result, non-resident US private investors pay 24% and 20% more tax on their dividends paid out in Latvia than in Estonia and Lithuania respectively. Most preposterously, this double taxation confers no extra taxes to our budget, but simply increases investor tax liability in their home countries. And every extra euro that an investor is forced to pay in tax to another country is one less euro that could be invested in Latvia. It really is that simple.

We cannot afford this type of unforced policy error if we are serious about attracting human or financial capital and encouraging economic success.

Frederick the Great lived in world where empires were built on the bones of soldiers that were trained to listen and accept their fate. It should come as no surprise that his military legacy was trounced by one of the foremost examples of the incredible power of human capital: Napoleon. His early success was attributable to the use of modern methods of warfare and his radical adherence to meritocracy in his Grande Armée. Napoleon stood for innovation and advancement, inspired great victories, and continues to fire our popular imagination to this day.

Yet we need not seek to emulate the empires of the past or even seek to build Churchill’s ‘empires of the mind’ to be successful in the modern world. We simply need to recognize the value of human capital, and aspire to create an environment where it can ascend to its highest expression.

We live in an Exponential Age that offers incredible economic incentives for victory – economic incentives that can build our tax base, and, in so doing, raise funding for healthcare, education, pensions and safeguarding our environment. These are noble pursuits, but we cannot achieve them if we are not committed to winning the fight for human capital. Once we convince ourselves that we do in fact want to win, and understand the importance of what we are fighting for and why, we stand a much greater chance of building on our own success and inspiring others to join our cause.

The Latvian version of this article originally appeared in the March 2022 issue of Forbes Latvia.