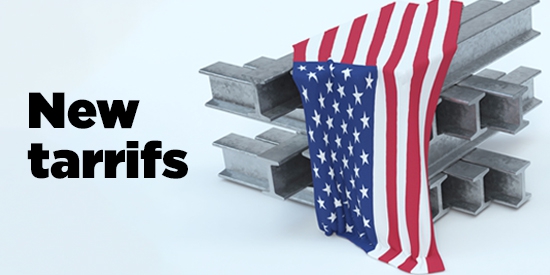 Fifty-one trade groups are joining the U.S. Chamber of Commerce and 222 state and local chambers by signing a letter that was sent to U.S. senators on June 26 in support of a bill introduced this month by Sen. Bob Corker, R-Tenn. The legislation would require Congress to approve or reject any new tariffs on steel and aluminum imports the Donald Trump imposes based on national security concerns. The letter is available here.

Those signing the letter include the National Retail Federation, the Alliance of Automobile Manufacturers, the American Apparel & Footwear Association and the Computer and Communications Industry Association. The Dow Jones industrial average fell 328 points Monday amid Trump's fresh trade threats.

Trump this month levied a 25 percent tariff on steel and 10 percent tariff on aluminum imported from Canada, Mexico and the European Union. The EU, in response, is aiming tariffs at American products such as Harley-Davidson motorcycles, Levi's jeans and bourbon whiskey. Harley-Davidson said Monday it plans to shift some of its U.S. motorcycle production overseas to avoid the duties. Trump also has threatened tariffs on auto imports, citing national security.