On The Limits of Perception, The Power of Math & Human Behavior 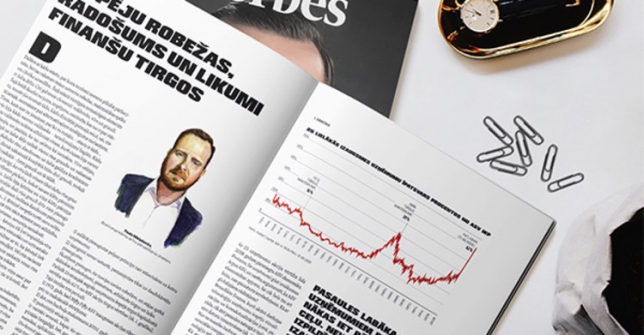 Pauls Miklasevics, AmCham Vice President and individual member speaks on the limits of perception, the power of math and human behavior in his November opinion article that was also published in the November 2020 edition of Forbes Latvia. Pauls is the author of "The Baltics and Beyond" investment blog and holds a Bachelor of Arts in Economics from Queen's University (Kingston, Ontario).

"I am going to tell you a story whose provenance I cannot ascertain, but that speaks to the limits of perception, the power of math, and human behavior.

The one constant of this story is that there is a chessboard. Other key components are 1) a king or emperor, (2) a man, and (3) grains.

Now at this point you might have guessed the story, but you will remember it the way you first heard it, and will most likely not know the alternative endings. For those of you who have no idea what I am talking about, here we go...

Once upon a time there was a powerful ruler that was wealthy beyond imagination. One day he decided to reward someone that had done him a great service and asked the man what he would like as payment. The man requested that the king place one grain of rice on a chessboard, and for the next 63 days double the amount of rice, so that on the second day there would be two grains on the next square, on the third day there would be 4 grains on the third square, and so on, and so on.

The ruler thought it funny that this man would ask him for ‘a few' grains of rice, and quickly agreed, instructing the master of his granaries to comply with the man's request. It came as a great shock to the king and his master of the granaries, that what started as a small sum of rice soon became too large to count (the promised quantity would exceed 18 quintillion grains of rice...), and that there was no way that the king could keep his promise.

On the 64th day, the man came to receive his reward, which, of course, the all-powerful ruler could not pay.

One ending of this story is that the king was so impressed by this man's wisdom, that he made him his most dear and trusted advisor.

Another version ends with the king having the man him killed for trying to fool him.

In a different version, the king insists that the man count every grain of rice before he leaves (also impossible), or leave empty handed.

Sometimes the man is presented as wise. Sometimes he is cast as a con-man. Sometimes the grain is rice. In other versions it is wheat. But what does not change is the math.

This story is often used to illustrate the power of compound growth, which is the most vital concept for any investor - and especially young investors - to master. Warren Buffett has said that his "life has been a product of compound interest," while his partner Charlie Munger has stated that the first rule of compounding is to "never interrupt it unnecessarily." But they would also be the first to tell you that (1) the ability to compound returns does not apply to every business, and (2) growth cannot be sustained on multiple expansion alone. As numbers get larger, they approach their limits, and natural constraints such as addressable market and time come into play.

Currently, the combined market capitalization of the 25 largest growth companies represents 62% of the value of the US stock market. Here is how this chart has looked over time: 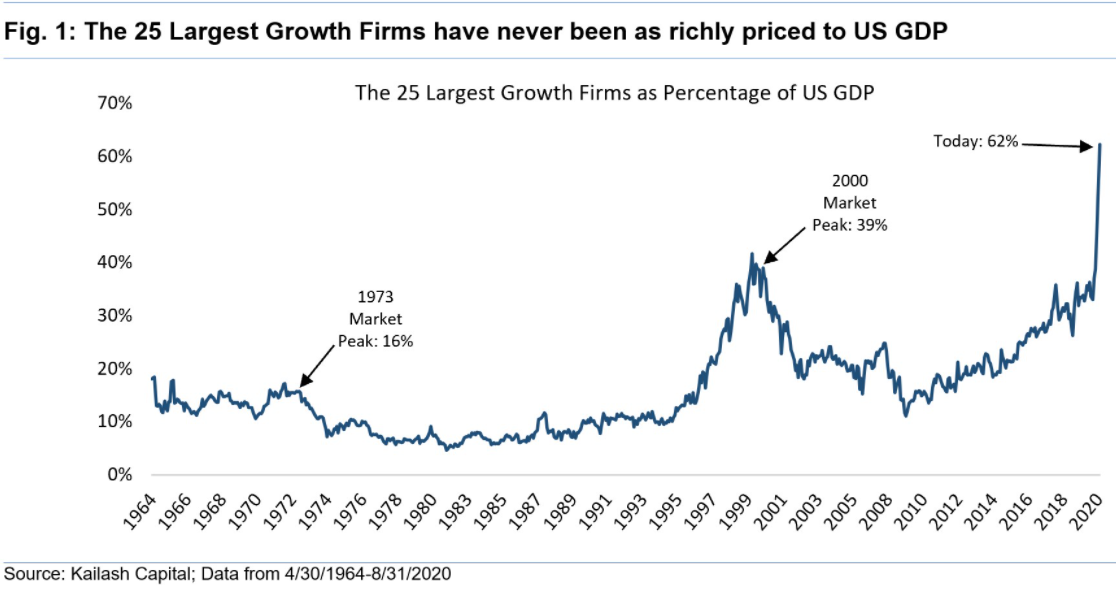 Three periods stand out: (1) 1973 when the ‘Nifty Fifty' US growth stocks traded at their maximum valuations, (2) the peak of the ‘dot.com' bubble in 2000, and, (3) today. There are many reasons why these periods of outsized growth in leading growth stocks did not continue indefinitely, but let us concentrate on our current market dynamics by taking a look into valuations, and what they imply on a grander scale.

The current market capitalization of the 25 largest growth stocks is currently around trillion. US GDP is approximately trillion. Even if US GDP grows at an ambitious 3% per year going forwards, at a 10% per year growth rate, these 25 stocks would be larger than the US economy by 2028.

Of course, these companies earn revenue outside of the US, so perhaps the size of the US economy, however large, is not the appropriate constraint. How about global metrics?

Benedict Evans, who has done great work in visualizing and contextualizing the opportunities and growth of technology companies, shows how quickly computer use has exploded on a global scale: 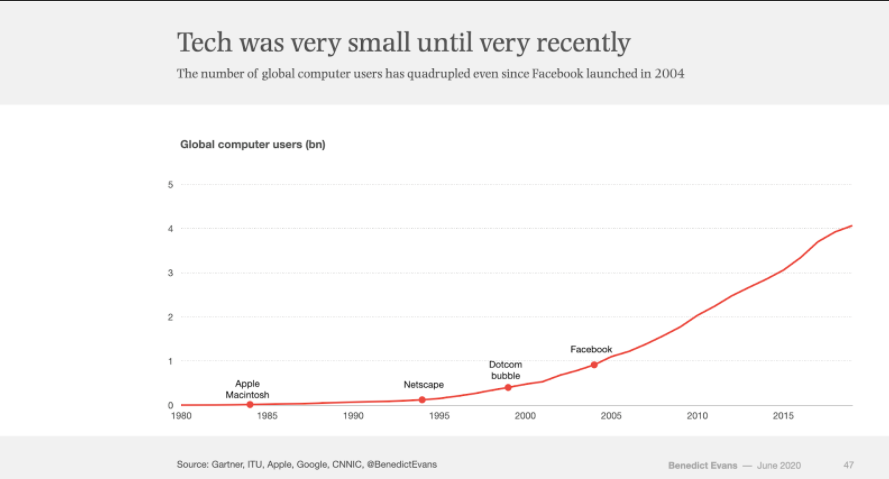 Certainly, this exponential growth has been captured by the ascendant and increasingly global US tech sector.

As Howard Marks commented in his most recent memo, in 1999 there were around 250 million internet users. Now there almost 5 billion. This implies a compound annual growth rate of around 16% over this period of time. If internet users continued to compound at 16% per year and the world continue its current 1.05% population growth rate, then internet users would exceed actual humans within four years. The formula reaches its logical constraint and breaks. Of course, we could add robots and the ‘internet of things' to challenge this assumption, but be careful what your wish for.

Seeking to justify ever loftier valuations, companies have continued to push the envelope on their Total Addressable Market (TAM) in their potential growth calculations.

One recent example was ride sharing company Uber citing global ‘transport' - calculated to be a 5.9 trillion market - as its ultimate market. The shift to ever larger TAMs proves to be very tempting, if not necessary, for many scalable technology companies. According to financial data company Sentieo, mentions of TAM are now trending like never before. Here is a graphic that tracks the mention of TAM in new IPO filings: 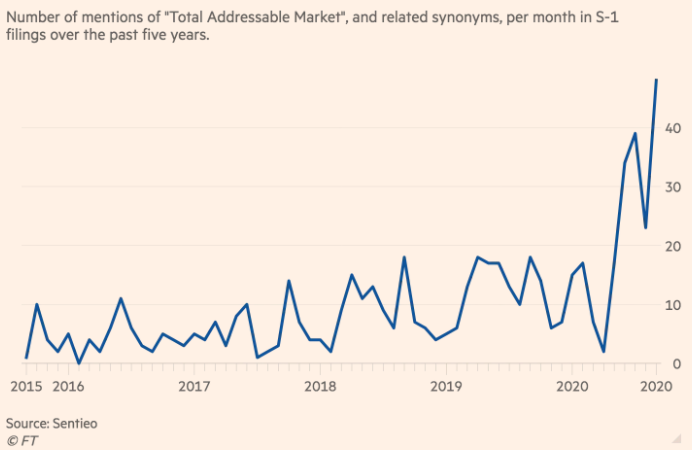 Intuitively, this makes sense. IPO valuations have gotten so high, that for many new companies the target future market must necessarily become, well, everyone...

Ray Kurtzweil is a technologist that is renowned for spotting powerful concepts and extrapolating the magnitude of their future implications. He often uses this chessboard story to show how it is on the second half of the chessboard that things change at an unimaginable rate. He has pointed out that applying Moore's Law (that the number of transistors on an integrated circuit double approximately every two years) over time leads to unimaginable advances in technology as effects compound, and, in effect, doubles the technological power of the previous advances. Eventually Moore's Law will reach its constraints as well, but what has now become possible was surely beyond the wildest dreams of even those who understood its magnitude early on.

Another key component of Moore's Law is that doubling capacity and increased competition has drastically reduced computing price, allowing for even broader effects within the world economy. For technology to advance, it has to continue to get cheaper, ultimately reducing margins. Very few exceptions exist.

One of the superstar stocks of the past four years is e-commerce company Shopify. Recently, Goldman Sachs came out with a valuation metric that stretched out growth trends and forecasted Shopify's key valuation metrics over the next 20 years. I suppose this was warranted as Shopify is currently trading at a share price that is currently 59 times higher than its sales. This puts it in a different stratosphere than most companies who are valued on such prosaic metrics as price to earnings. Goldman, in effect, is showing us the chessboard with ever higher piles of rice. Would the man from the story have been able to get to king to agree to his scheme if he had already filled half the chessboard with rice? I think not.

The fact that a single company as successful as Shopify exists, and has grown as quickly as it has means that there will be hundreds of emulators that will stop at nothing to try to out-innovate them and/or undercut them on price, or find some new way to change the game entirely. It is clear that Goldman Sachs's valuation metric narrative is simply following the numbers they have available to them, and cannot possibly account for every permutation in terms of revenue, margins, and, ultimately, profitability. There are too many moving parts that we know of, not to mention those that might appear in the future.

In cases like these it serves investors well to remember that in a simple three move chess game there over 9 million possible combinations of chess pieces. The global economy has slightly more moving parts than two players playing with 16 pieces on a sixty four square board with controlled, turn-based game play. Although the market is offering rich prizes for the ultimate winners, many valuations have been pushed beyond any reasonable approximation of near term - not to mention long term - perfection.

Twenty years ago, Apple, which is now the most valuable company on earth had not yet invented and successfully brought to market the iPod (remember them?), not to mention the iPhone. The top companies in the world have all had to reinvent themselves along the way (see: Microsoft, Amazon). None followed a path of simple compound growth set out by the finest analysts of their day. Especially not after they were already past what is most probably their fastest acceleration in growth. Small bases can compound at an impressive rate, but this gets considerably more difficult as competition catches on and the numbers get prohibitively large.

Getting back to our original story, no one remembers the name of the king or the man. All that remains is the story. The power of the numbers do not change, but be careful of which ending to choose to believe. And make sure that, at the very least, you survive to tell the tale."