The U.S. Presidential Elections and the Stock Market 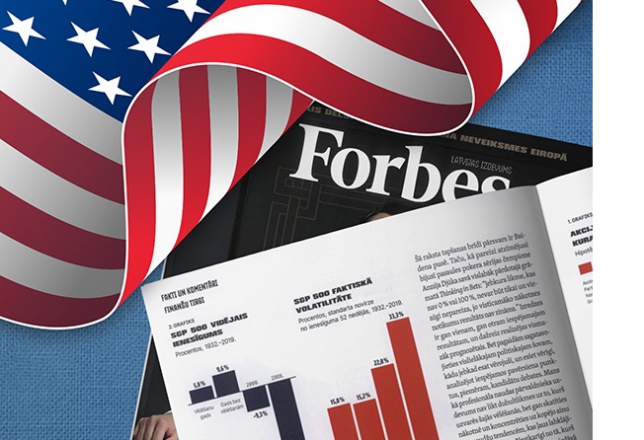 Pauls Miklasevics, AmCham Vice President and individual member speaks on the upcoming U.S. Presidential Elections and the Stock Market in his October opinion article that was also published in the October 2020 edition of Forbes Latvia. Pauls is the author of "The Baltics and Beyond" investment blog and holds a Bachelor of Arts in Economics from Queen's University (Kingston, Ontario).

"It was past midnight in Riga, but the voting results from the US presidential elections were just starting to trickle in. I had to be at the airport at 6am to catch the early flight to Berlin, but this was political drama at its best. Just a couple more exit polls. This was important. I could sleep on the plane.

The odds were in largely in favor of the Democratic Party's presidential candidate Hilary Clinton defeating the Republican Party's Donald Trump - most polls gave Clinton a 60%-70% chance of victory. But the election results were starting to tell a different story. It would be close. And Trump had a chance. In fact, he had taken the lead in the projected count of Electoral College votes.

I got to the airport and the election was still too close to call. I hadn't missed much in the four hours I had slept. Trump still had a slight edge.

But when I landed, it soon became clear that the next President of the United States of America would in fact be Donald J. Trump.

The reason that I was in Berlin that day was to attend one of the largest annual investment fund conferences in Europe - Citywire Berlin. As the conference started, the attendees all seemed to be in a shock-induced daze - I had never seen so many smart people look so confused. Financial markets had been utterly surprised by Trump's victory, and the surprise soon turned to panic. US stock market futures limited down. Surely the world as we knew it was ending! But then something just as unexpected happened - the markets started to rally. Not only did they rally, but by the end of that day's US market session, the market had closed up strongly. And in the months that followed the rally kept going and going. From election day on November 8, 2016 to January 30, 2018 the total return or the S&P 500 index was +35%.

2016 recap: the ‘smart money' was wrong about the election result, but quickly seized upon a completely different narrative to drive the market higher. Sure, Trump had been a political question mark, but perhaps his pro-business approach, potential tax cuts and infrastructure spending would be good for markets!

Right, so what is going to happen in this year's presidential elections? Who will be president: Trump or Biden? How will markets react? Great questions. I have no answers. But I have some observations based on experience that I can share.

Before we get into this year's election, here is the best single chart that I have come across about the interplay of the stock market and US Presidential elections: 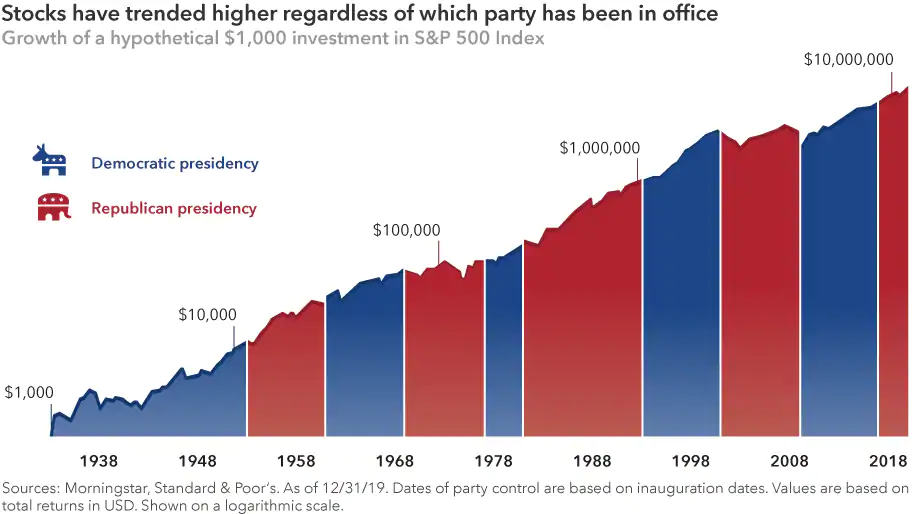 There are two things that stand out in this chart. The first is the impressive historical performance of the S&P 500 index over the given time period. Years and years of political strife, democrats beating republicans, republicans taking back control, wars, protests, a presidential assassination, and yes, even pandemics. And yet, if you had invested 00 in US stocks in 1932, the year Franklin Delano Roosevelt was elected, your money would have grown to over ,000,000. 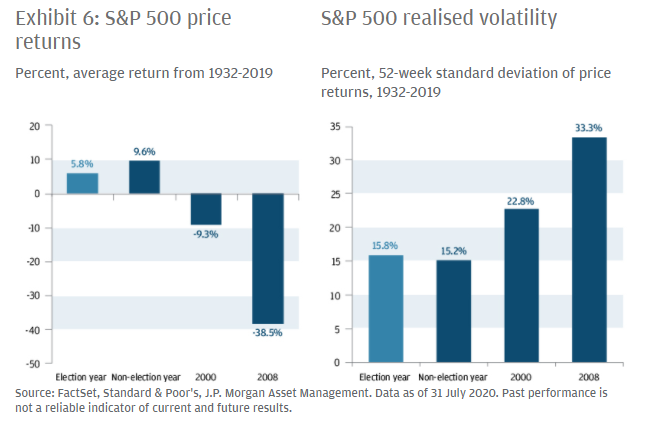 Yes, but surely this year is different. What about what you read in the news? What about ‘fake news'? What about the looting, the protests and anger that you see in the media? It is a very rational response to be fearful when you see things like this going on. I have clients who have told me that their friends have sold all of their positions and want to know if they should do the same. We prefer to err on the side of caution, but selling ‘everything' is an act that can only be motivated by fear. And we take such concerns very seriously.

Let's start with what we know and consider some possible scenarios, while allowing for the fact that so very much can change in the period of time leading up to November 3rd.

The first major issue is that Covid-19 restrictions will create a very different in-person voting environment than in previous elections. It is also anticipated that there will be a record number of mail-in votes, which take considerably longer to tabulate. This means that there could still be many votes to count in the days following November 3rd.

What's more, it currently looks like far more Biden supporters intend to mail in their votes than Trump supporters. This could theoretically create a scenario wherein Trump could take the lead in many contested states only to ultimately lose when the mail in votes are all counted. 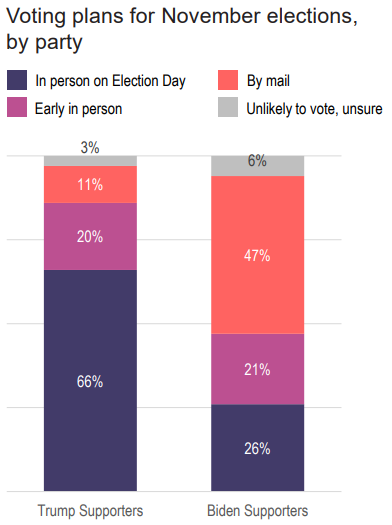 However, two major contested states - Florida and North Carolina - have rules in place that could allow them to count mail in votes more quickly than others. If Biden wins both states, it will quickly signal game over for Trump, regardless of the outcome in key swing states such as Ohio and Pennsylvania.

Under normal circumstances, this type of electoral uncertainly would tend to have a negative effect on markets. But this has been a year far from a normal circumstance. During 2020, the S&P 500 has already fallen 34% and then subsequently risen 60%.The US economy has been shut down. Almost 200,000 Americans have died. Will one week, or even several weeks of waiting for election results cause mass panic? Or will certainty and closure one way or another be followed by some portion of the massive amounts of money sitting in money market funds flowing into stocks?

According to US Fed data (https://www.federalreserve.gov/releases/efa/money-market-funds-investment-holdings.pdf), US money market fund holdings rose from .120 trillion to .253 (+36%) from the end of 2019 to the end of April 2020. It takes time for the Fed to publish its official data, but from the end of April until mid-September, the Investment Company Institute has calculated a drop in total money market assets of 6%. The largest money market funds have not seen significant asset outflows. Over trillion of liquid assets are earning next to nothing and waiting for clarity.

Another important dynamic to consider is that regardless of who gets elected, on September 16th the US Fed indicated that they would most likely not raise rates until 2023. They will also target average inflation of 2% on a multi-year period. What does this imply? That the US could have five years of 1% inflation and on the fifth year inflation could rise 6% and upper bound of the Federal Funds Target Rate would still be 0.25%. It means that inflation can start to gather speed over the next four years and the Fed will not intervene.

If Trump wins, there will most likely be more tax cuts. In the short term this would be supportive of risk assets. If Biden wins, he is expected to eventually repeal some of Trump's corporate tax cuts, but intends to make massive investments in green infrastructure and education. Again, government spending is supportive of risk assets in the short term.

As I write this, the odds currently favor Biden. However, as former World Series of Poker champion Annie Duke so correctly stated in her best-selling book ‘Thinking in Bets': "Any prediction that is not 0% or 100% can't be solely wrong because the most likely future doesn't unfold". Odds exist for a reason, and sometimes the least expected result comes to pass. In the meantime, brace yourself for the most political noise you have ever heard, and be shrewd in your analysis of possible turning points such as presidential debates. As a professional money manager, my job is not to place a binary bet on who will win this election, but to look beyond and focus on the big picture and the generational trends that will allow wealth to compound over time. Regardless of who becomes president, this approach has the least noise and the best odds of success."