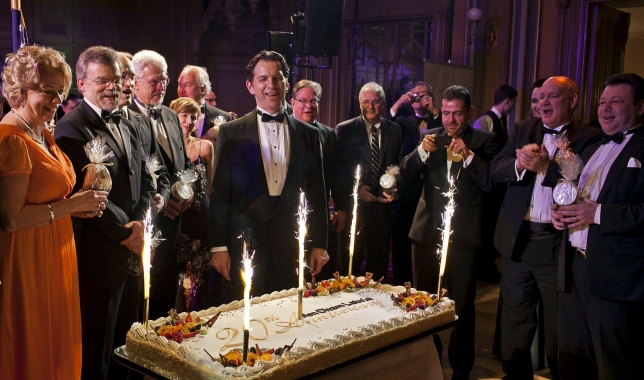 Over 200 guests attended the Gala Dinner to celebrate the occasion of the 20th Anniversary of AmCham Latvia on Saturday, March 2 at the Small Guild in Riga.

Keynote speakers Daniels Pavluts, Minister of Economics of the Republic of Latvia, Mark Pekala, US Ambassador to Latvia, and Ivars Slokenbergs, AmCham President, delivered remarks on the occasion.

Minister Pavluts said: "I believe sincerely that American people, businesses and government are trusted friends of Latvia and that our relationship is based on the solid foundation of transatlantic partnership and friendship."

He went on to say: “This is the partnership within which I see the role of AmCham as a leading organized business body in Latvia. Your 20 years have also been our 20 years.”

"You have been successful in fostering friendship between Latvia, Europe and America for already 20 years. And – as you know – for a friendship 20 years is a solid period. I wish us the best of success that we can share – as good friends," the Minister said.

According to the Ambassador, "I had heard all the great things AmCham does before I got here, and it has been my privilege to work so closely with them since my arrival. AmCham is a leading proponent of our aims in Latvia, on the US-Latvia trade relationship, creating a business friendly environment and a more transparent environment where American businesses can operate on a more level playing field. In all these areas AmCham has made great progress in the last 20 years."

Ambassador Pekala added: "I think of AmCham as the organization that is helping all of us – Americans, Latvians, Europeans more generally – in specific and broad ways together. Because of AmCham, over 6,000 children have received medical care through the Ronald McDonald Caremobile. Just recently, AmCham board members and I chose participants from business incubators in Latgale who will travel to New Orleans for more training with the world-renowned business incubator Idea Village. AmCham makes Latvia a better place, and AmCham makes the United States a better place. Happy 20th birthday and may you have 200 more."

AmCham President Ivars Slokenbergs said: "AmCham Latvia is a classic American association, with its founders coming together and organizing, with a view to exchange ideas and experiences, to make contacts and find camaraderie, and to work together in promoting a specific goal, the promotion of US-Latvian economic ties."

He went on to say: "While we remain primarily a group of American enterprises, or other nations’ enterprises sympathetic to the US, with a goal to promote commercial ties between the US and Latvia, at the same time, we care deeply for Latvia, and have made the improvement of Latvia, in particular promoting a transparent business and investment climate, and the raising of Latvia’s global competitiveness, as one of the principal goals of the organization.

We hold a deep affinity for the welfare of these two great countries, the United States of America and the Republic of Latvia, and we, the Chamber, are the bridge for promoting ever-closer ties between the two," AmCham President said.

In addition, over LVL 1500 were raised in the charity raffle held during the course of the evening in benefit of RMHC Latvija’s Care Mobile and SOS Children’s Villages Latvia. As a result many children in Latvia will be able to receive free healthcare and family-based support.

Vija Tirzmale, RMHC Latvija said: "We are truly grateful to our friend AmCham for the great support we have been receiving from them ever since our establishment in 2007. For the proceeds raised during the Gala Dinner RMHC Latvija will be able to cover one and a half days of medical services of the Care Mobile and serve over 50 children."

Ilze Paleja, National Director of SOS Childrens’ Villages Latvia said: "SOS Childrens' Villages in Latvia would like to say a Big Thank you to the American Chamber of Commerce and it’s members for the support given through the charity raffle during the 20th anniversary celebration evening on March 2nd. Every single donation, whether financial or in-kind, is very valuable support to our villages in Valmiera and Īslīce, where our SOS moms are taking care of their children. It also allows our children to participate in various free time activities, develop and integrate into the society. We also thank you for the given opportunity to present our brand new video on our organization."

AmCham Latvia was one of the first Western chambers established in the Baltic region. Since its establishment in 1993 by 27 US investors, it has grown into a professional business organization, representing more than 130 leading international and local companies in Latvia.

AmCham is committed to strengthening trade and investment relations and nurturing partnerships and friendship between the US and Latvia, and serving as a hub of networking and thought leadership for its members and partners as well as for the local and international business community in Latvia. In addition, AmCham is committed to building a better business and investment climate in Latvia. The goals and actions of the Chamber are grounded in its core values of integrity, responsibility, cooperation and excellence.

In the past twenty years, AmCham has delivered qualitative programs through which members and partners were able to gain information, education and knowledge. It has:

In the days ahead, AmCham will continue to serve its members as a vibrant forum to exchange views, network and connect. Its refreshed logo and enhanced website reflect a more interactive communication with all its stakeholders – members, media and the public at large. AmCham looks forward to continuing towards a more prosperous and competitive Latvia open to high value investments and trading relationships.