Pedal for no medal! 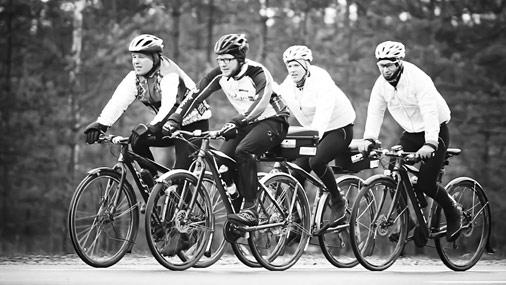 By supporting reconstruction of Oncology Ward of Children's Hospital Radisson Blu hotels in Riga launched donation campaign during which Radisson Blu Cycling Team started challenging journey. Four brave members of Radisson Blu Cycling Team mounted their bicycles and set the course to Sochi in Russia, home to the XXII Winter Olympic Games. The four cyclists not only experienced obstacles and had all other sorts of fun, but also acted as messengers of good wishes, as they picked up the letters and drawings prepared by the little patients of the Children's Hospital in Riga and delivered them to Latvian Olympic team in Sochi. The cyclists devoted this adventure to a good cause, encouraging the followers of this project to make donations for the renovation of the Hemato-oncology ward of the Children's Hospital. 4 guys, 4 bikes, 2802 kilometers, 17 days in the middle of the winter and no medals, just pedals!

To celebrate the 25th anniversary of the Baltic Way and support charity project "For the Little Hearts" Radisson Blu Cycling team excepted an unprecedented challenge - 24 hour cycle ride from Vilnius to Tallinn. By accepting this challenge cyclists wanted to draw attention to Ziedot.lv charity project as well as celebrate significant anniversary of the Baltic Way. They completed their challenge with 603km in 24 hours on August 24.

Follow their new adventure here and through their social channels and don't forget to have fun - www.boredofborders.com.