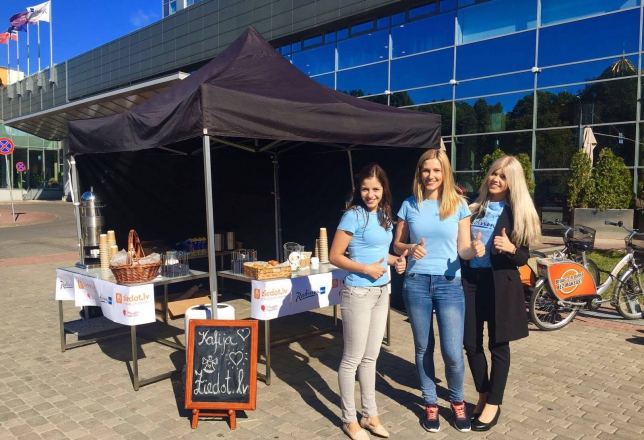 Taking responsibility for the environment and local community has been an important part of Carlson Rezidor's broader commitment to sustainable development for many years. That's why in 2001, this commitment was fortified and placed within the scope of a program called Responsible Business. Each hotel has a unique Responsible Business Action Plan covering areas such as community outreach, environmental improvement, employee well-being and health and safety.

Just as other Radisson Blu hotels all over the world, Radisson Blu Latvija Conference & Spa Hotel is actively supporting and participating in various charity activities throughout the year - cooking for soup kitchen, donating to the Red Cross, participating in The Big Cleanup, Earth Hour and other activities. But each year in September Radisson Blu hotels are especially encouraged to take action in their hotels and throughout their local communities by organizing social and environmental service activities, and year 2016 was not an exception.

For a week in September there was a street pop - up café set up in front of Radisson Hotel Latvija Conference & Spa Hotel where each passer-by in exchange for donation to Ziedot.lv foundation For Little Hearts, which aims to support rehabilitation for children with various movement disabilities, were able to get fresh pastries and hot drinks. At the end of the month Radisson Blu Latvija Conference & Spa Hotel organized a special event for the kids and their families with workshops and watching cartoon on the big screen where the donation of 2040 EUR which was gathered during Coffee Sale was given to representatives of Ziedot.lv. This activity was a great success as more than 100 rehabilitation sessions could be covered with the donation.