RSU Ranks Top in Latvia and Second in the Baltics 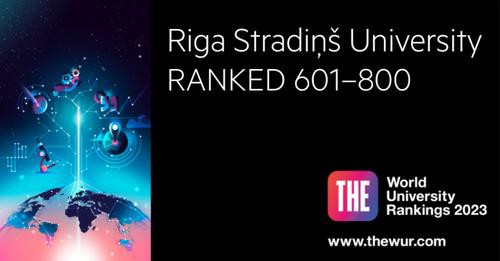 Last year, 1,662 universities were included in THE World University Rankings 2023, but this year the number rose to 1,799 universities from 104 countries that passed the criteria. In an increasingly competitive environment, entering into and retaining a position in the rankings becomes ever more challenging for any university. All four research universities from Latvia have made it into the rankings, and their order in the ranking table remains unchanged: RSU is the ranked highest, followed by the University of Latvia (801-1000), Riga Technical University (1201-1500), and Latvia University of Life Sciences and Technologies (1501+).

A key prerequisite for being included in this ranking is conducting intensive research. This criterion is based on data from the Elsevier Scopus database and takes universities’ research impact, the number of indexed publications, as well as universities’ international cooperation into account. This makes it possible for only a small number of the world's top universities to be included in the THE ranking.

Compiling the ranking, universities are evaluated according to 13 criteria in five main areas: teaching, research, citation, industry income, and international income. RSU achieved the highest result in two categories - global outlook and citation. These are not only the university’s best indicators, but also the highest results in Latvia. The university's best result was in the internationality indicator - RSU ranks 297th in the world in this category. This indicator assesses a university's ability to attract international students and lecturers, and also calculates the proportion of scientific publications that have at least one international co-author. The university’s second-best result was in the category regarding citation of scientific publications, which measures the quality of research. Here, RSU is ranked 399th in the world.

THE is considered one of the most influential university rankings in the world and has been compiling rankings since 2004. Since then, THE has become one of the most reliable sources of providing data for students, academicians, university leaders, as well as government and industry representatives to help assess the performance of universities on a global scale.