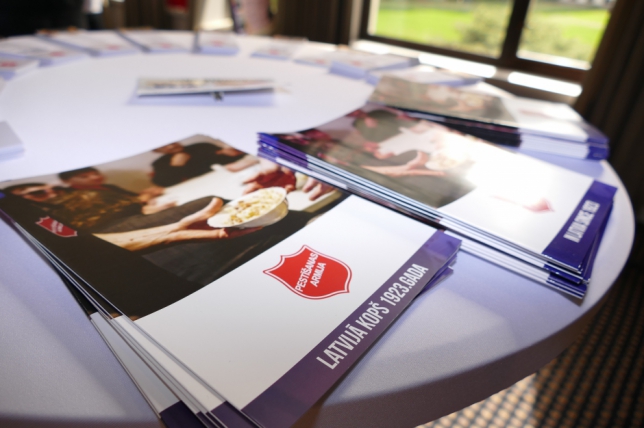 Members of the British, American, Canadian, Irish, Finnish, Netherlands, Norwegian, Swedish and Swiss Chambers of Commerce met at the Radisson Blu Daugava Hotel for the Joint Chamber Lunch with André Cox, The 20th General (CEO) of The Salvation Army.
The guests were addressed by the General and the regional leader Robert Tuftström. It was a chance to hear about the global structure, approach and goals of one of the largest charity organizations in the world, as well as the history and progress of the local chapter here in Latvia.
The Salvation Army is an organization with many years of experience of working with children, youth, adults and elderly people who are vulnerable and marginalized all over the world. They try and offer faith based practical help and advice.
The Salvation Army organizes social initiatives such as camps, creative activities, musical school, elderly fellowship, practical homeless assistance, natural disaster relief, and programs through which homeless people can transition back into the work force.
History of Salvation Army in Latvia starts in 1923 when it was initially established in Jelgava. The work flourished for 20 years and spread over the country, starting churches and saving lives through its social work. In 1990 The Salvation Army was allowed to open up official work in Latvia again. Today in Latvia the organization has: 23 Officers (church leaders) and 396 members; 14 churches, 7 social institutions; 11 soup kitchens and more.
Share:
< Back to News