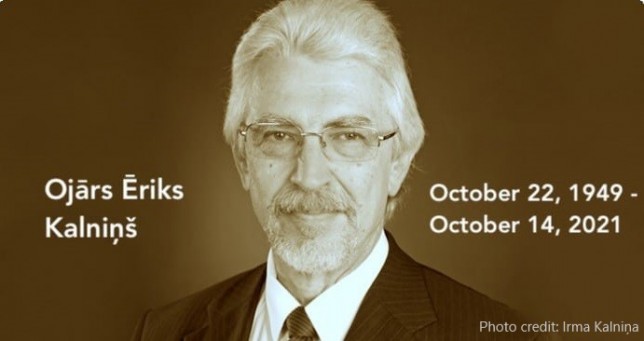 An outstanding diplomat, public and political figure, Member of the Saeima, former Ambassador of Latvia to the U.S. and AmCham Honorary member Ojārs Ēriks Kalniņš, passed away on October 14, 2021 in Riga.

Ambassador Kalniņš was born on October 22, 1949 in a refugee camp in Munich, later moving to the United States with his parents. He received higher education in philosophy and later worked for advertising agencies. Prior to moving to Latvia, he was an active member of the American Latvian Association and the World Association of Free Latvians. He has been bestowed the Order of the Three Stars.

In 1991, Ojārs Kalniņš began working at the Latvian Embassy in the United States, and in 1993 he was appointed Ambassador to the United States. In 1999, he concluded his work as a diplomat and became the Director of the Latvian Institute, holding this position until entering politics.

On behalf of the AmCham community, we offer our deepest condolences to Irma Kalnina and entire Kalnins’ family and friends. Ojars Kalnins dedicated his extraordinary life to Latvia. We will remember him for his endless support and guidance in enhancing relations between Latvia and the U.S., and his devotion and service to Latvia.

Please help keep his memory alive by supporting the brave young boys and girls of the Latvian Youth National Guard (Jaunsardze) by using the following bank account and a reference: