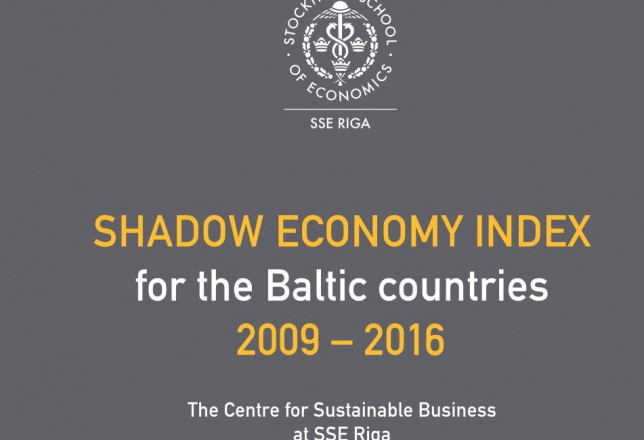 The results of the study “Shadow Economy Index for the Baltic countries” were presented at a conference “Shadow Economy in Latvia” on 10 May, dedicated to the subject of shadow economy contraction in Latvia and organised by the Centre for Sustainable Development at SSE Riga in cooperation with the Latvian Chamber of Commerce and Industry and the Ministry of Finance of the Republic of Latvia for seven consecutive years already.

In 2016, Latvia saw a slight contraction of the shadow economy, thus continuing the long-term trend since 2013. In contrast, there has been a modest increase in the size of shadow economies in Lithuania and Estonia.

Irrespective of the positive trend in 2016 as compared to a year before, Lithuania still stands out among the Baltic countries as having the highest level of bribery.

The highest levels of shadow economy in Latvia are observed in the Kurzeme region and Riga, as well as its vicinity.

As emphasised by Dr. Arnis Sauka, “Results prove that entrepreneurs in all three Baltic countries are of the opinion that the risk to be caught for underreporting of business income, wages, and the number of employees is relatively high. Nevertheless, at least a quarter of the interviewed company managers in all three Baltic countries do not perceive the consequences of being caught as significant.” In line with the study data, smaller and younger firms engage in proportionally more shadow economy than larger and older firms. However, the differences across company's size categories are not explicit; some large companies also contribute to the shadow economy considerably.

Also in 2016 entrepreneurs in all three Baltic countries were relatively satisfied with the performance of the State Revenue Service (SRS) and relatively unsatisfied with the government’s tax policy and support to entrepreneurs. Satisfaction with the SRS in Latvia in 2016 has decreased as compared to the period 2012-2015 when the satisfaction of entrepreneurs was almost invariably high. Similarly, satisfaction of Latvian company managers with the government’s tax policy has diminished considerably, and it is relatively lower than in other Baltic countries. Altogether, Latvian companies are less satisfied than their Estonian and Lithuanian counterparts, and it basically explains the higher level of the shadow economy in Latvia.

The study results prove that the so called tax morale is high in all three Baltic countries. It means that entrepreneurs are not of the opinion that tax evasion “in case there is a chance,” would always be justifiable behavior. “We use various indicators (both direct and indirect) in order to measure the attitude of company managers towards community belonging, as well as their attitude towards tax avoidance. Everything leads to the conclusion that company managers in Latvia are patriots of their country and would often rather lead a more peaceful life without avoiding taxes. Thus, not so much campaigns about the usefulness of paying taxes, but rather targeted measures to improve the business environment are the tools that the policy makers should work on more,” emphasises Dr. Arnis Sauka. The study results indicate that the work on the reduction of shadow economy should be continued not only in Latvia, but also in Lithuania and Estonia, where several negative trends regarding factors that affect shadow economy have been registered. In Latvia, company managers are of the opinion that it would be crucial to work on the improvement of the tax system and to minimise uncertainty about regulatory policies.

The SSE Riga Shadow Economy Index for the Baltic countries is estimated annually based on surveys of entrepreneurs in the Baltic countries. Since 2009, when the first survey was carried out, all three Baltic countries have experienced contraction in the relative size of their shadow economies, with the most dramatic decline being experienced by Latvia (from 36.6% of GDP in 2009). The authors of the survey are Dr. Arnis Sauka, Director of the Centre for Sustainable Business at SSE Riga, and Dr. Tālis Putniņš, Professor at SSE.