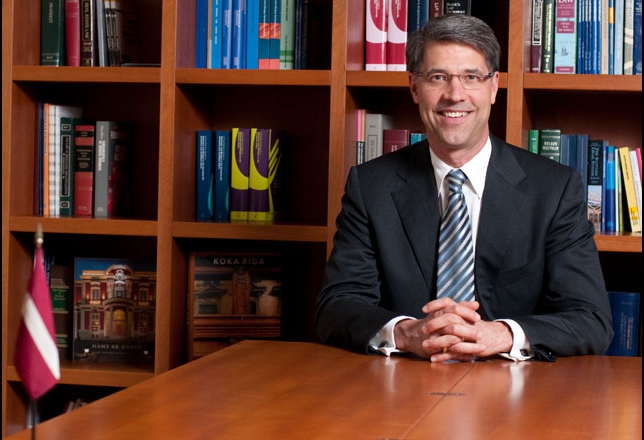 How did this year begin for your law firm, Ellex Klavins?

Early this year our law firm merged with the team of lawyers from the law firm Glimstedt Latvija jointly forming the biggest law firm in Latvia. The Ellex Circle of law firms in Latvia, Lithuania and Estonia now consists of 265 employees, and therefore we can boast to be the leading law firm in the Baltic States. Our key lines of practice are commercial law, mergers and acquisitions, banking and finances, dispute resolution, EU and competition law, real estate sector, labor law, and compliance services, tax issues, as well as intellectual property and technologies.

This is also a very significant year for our firm as it is the 25th anniversary of Ellex Klavins -Filips Klaviņs and I began our work together in 1992 as a team consisting of three lawyers, our first "office" was in Filip's apartment. We have grown with time, and currently the team in our Latvia office consists of 60 people. This is a very professional and experienced group which continues to look forward to new challenges.

What changes have you observed in development of the business environment of Latvia throughout these years?

Since Latvia regained its independence in 1991, we have worked on many of the most significant and complicated investment projects in Latvia. Having the benefit of that experience, it has been exciting to observe how the business environment has changed and developed during these 25 years. It's also important to note that some issues that were topical more than 20 years ago have still not been resolved. One such issue is that of attraction of investments, the investment environment in Latvia and the positioning of our country in comparison with our neighbors.

The example of Estonia shows how targeted positioning of the country in the IT sector has helped to facilitate investment, as several major deals in the so-called TMT sector (Technologies, Media, and Telecommunications) were completed in Estonia, helping Estonia secure the leading position in 2016 as the most attractive Baltic country in the M&A sector. Latvia should also work to position itself in a targeted and uniform manner, develop our own elevator pitch and not be shy about publicizing it. It would help not only businesses, but also investors, and would strengthen the economy in general.

And what is the situation with the Latvian legal framework?

Investors who come to Latvia from Europe or America will find Latvia's legislation to be familiar, as it is harmonized with the EU legal framework. The legal framework governing the sale and purchase of companies is understandable for foreign investors in Latvia, as it is in line with European practice. Most of the problems in this area relate not to the laws themselves, but to how these laws are applied in practice. And here I am not referring to only the judicial system, but also government and municipal authorities, who our clients still tend to find are unhelpful, to say the least, and on occasion, incompetent.

Which legislative areas are in the most dire need of improvements?

Certainly taxes, insolvency and the labor law should be noted. Labor laws in Europe are generally more restrictive of employers in comparison with the USA. It is also important to seek more predictability in the application of laws and regulations. We often see that foreign investors find it impossible to follow the numerous changes in the law and regulations. It requires additional resources on the part of the investor, and not everybody is ready to allocate budget for that. In this regard, larger investors who can allocate the resources for this type of work would be in a better position than small or medium sized investors.

Our clients - major foreign investors in Latvia - still face disadvantages due to corruption. Most often, this is felt indirectly, by the comparative advantage competitors who engage in corrupt practices enjoy. As Latvia struggles to get to grips with the grey economy, many of the foreign investors faced with this uneven playing field look in the direction of Estonia as a result, despite possible disadvantages of geographical location.

I would say that factors more detrimental to investment than Latvia's existing legislation are the bureaucratic institutions, which are still too burdensome and ineffective/unprofessional/incompetent, the scourge of corruption and the grey economy, in combination with the unstable geopolitical situation in the region and globally.

Last year you received Mergermarket award in M&A sector. Was it awarded for some specific deal, or for this line of practice in general?

Yes, we were proud to receive the Mergermarket European award as the best Baltic law firm of 2016 in the M&A market, which is certainly a notable acknowledgement of our efforts. Ellex's nomination for the Mergermarket award was based on 15 different M&A transactions. In the context of this award one of the most high-profile transactions of recent years - sale of shares in the company Latvijas Gāze - deserves special attention. The Ellex legal team that worked on this transaction dealt with a number of issues related not only to the industry-specific legal framework and regulatory issues but also worked their way through other legal aspects caused by the specific regional geopolitical situation and the energy market. Other major transactions of Ellex in 2016 included advising AS Senuku prekybos on the acquisition of full management control over all its chain stores in the Baltic States and Byelorussia from its shareholder Kesko. The Ellex legal team also provided legal assistance in relation to the transaction where Providence Equity Partners acquired Bite.

What would you name as the key long-term tasks to advance Latvia's development?

In light of the processes currently unfolding in the EU and on a global scale, it is important to work towards ever closer collaboration among the Baltic States. In the eyes of foreign investors the Baltic States are a single region; therefore, combining the ambitions of each country towards a common goal would provide the best chance to attract the investments to the Baltics. I have personally experienced this when meeting with London law firms. They are understandably more interested to speak if we can talk about opportunities on a pan-Baltic level, alongside colleagues from other Baltic States, rather than just discussing opportunities in Latvia.