March was the Most Volatile Month in Financial Market History - What Happens Next?

Pauls Miklasevics, AmCham Vice President and individual member and speaks on the recent turmoil in the capital markets due to COVID-19 in his April opinion article. Pauls is the author of  "The Baltics and Beyond" investment blog and holds a Bachelor of Arts in Economics from Queen's University (Kingston, Ontario).

"March was a terrifying month. Covid-19's rampant spread put a strain on all of the institutions that shape our modern world - our governments, our healthcare systems, our financial markets, our trust in the most simple interactions with one another, and, yes, even our Netflix bandwidths. Over the past month we have all learned more about the exponential spread of viruses than we could have ever imagined. Perhaps I will one day use this experience as a way of illuminating the power of compound growth in investment portfolios, but today is not that day.

In university I studied economics and literature. Over twenty years in capital markets has taught me that economists mean well, but that as Hamlet said to his rational friend Horatio: "There are more things in heaven and earth, Horatio, / Than are dreamt of in your philosophy" [Hamlet (1.5.167-8)]. In economics, there is a considerable gap between theory and practice. This past month brought this to bear like no other single month for almost 90 years. Economic theory is based on rational decision making. Capital markets like to remind us every once in a while that this is not entirely the way the world works. What's more, capital markets are terrible at pricing binary outcomes. It is hard to think in terms of probabilities when the entire world is braced with a fear that it has never felt before and hopefully never will again. Hopefully. But I am no virologist, so let's get back to economics.

Classical economics gets one thing absolutely right: the power of ‘supply and demand'. We spend a lot of time thinking about supply and demand and its implications on our investment portfolios, and in March we bore witness to its ferocious power. As news of potential lockdowns spread, the media was rife with reports of people buying unreal amounts of toilet paper (a huge increase in demand!) - so much so, that it seemed at times that there was a distinctly different ‘health crisis' going on. Inventories were drawn down by hordes of buyers to the point where, in many stores, supply was exhausted. Shelves were empty.

On the other hand, in capital markets, we saw large inventories of securities (a different kind of paper) for sale (supply) with no buyers. The most notable example of this imbalance of buyers and sellers was when several of the world's largest and most liquid bond ETFs were trading at massive discounts to their net asset values and were in a state of structural disequilibrium that should not rationally happen. Not the greatest endorsement of free markets, but for a period of time there were simply more sellers than buyers... However, just as our favourite sellers of toilet paper have restocked their shelves, buyers have shown up to balance out massive pricing discrepancies in securities. It just took some time. Although most financial asset prices remain much lower that they were before Covid-19 spread outside of China, we have seen a strong resurgence in most asset prices since the March 23rd lows.

This is attributable to many factors, but the most significant reasons as to why markets have rebounded are 1) the massive rescue package passed by the US Congress, and 2) the massive balance sheet expansion by the Federal Reserve. The amount of money with which the richest country in the world is ready to attack this crisis is without comparison in the history of the world. And what you learn in capital markets is that you don't fight against the guys that make the bullets.

By March 23, 2020, markets had fallen harder and more quickly than any recorded month since September 1931, only to rebound significantly the following week. So what happens next? When will this historic volatility subside? Unfortunately, I cannot answer these questions. However, we are singularly focused on how the larger pieces of the puzzle will be moved or reshaped in this crisis and how they will influence future returns in different asset classes. 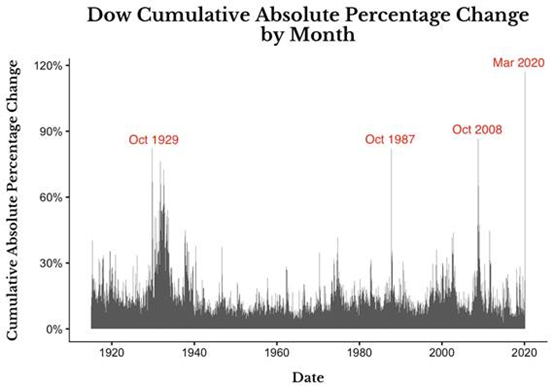 First of all, interest rates in the US will remain low for the foreseeable future. The US is devoting 18% of its GDP this year to combating this crisis. This comes on top of the large deficits that it had already been running under the Trump administration. Higher rates would massively increase the financing costs of government debt, so that is the last thing they could possibly want. Trump has been going on about the need for low Fed rates for quite some time, and this comes across as yet another cautionary tale of ‘be careful what you wish for'. Investors tend to be rightfully weary of large government debts, but the massive buying of US government debt at the current low yields does not indicate that investors are overly bothered by government debt at the moment. The second level implication of low interest rates and massive monetary stimulus is that it lowers the discount rate on risk assets, which means that quality risk assets will ultimately trade at higher valuation multiples than before this crisis.

Massive monetary stimulus in a functioning economy would usually lead to inflation, which would then eventually be countered by higher rates. But a heavily indebted government would rather not pay high debt servicing costs, so inflation is going to have to be pretty convincing before the Fed takes action, which portends that it will probably be too late and that moderation will no longer be an option. Inflation would also - conveniently - devalue the real amount of debt to be refinanced or paid back in the future. Inflation also eats away at the value of money that is sitting on the sidelines, which should gravitate more towards real assets that hold their relative value to fiat currencies. Timing all of these moves and secondary implications is most certainly an inexact science, but identifying the implications of these large underlying phenomena allows you to get ahead of the game and only requires patience. As gold trades to its highest level in 8 years we will only hear more and more clamouring about the dangers of fiat currencies, this is another piece set in motion:

One asset that is most certainly not at its highest price in 8 years is ‘black gold'. Crude oil was already in a state of oversupply before the Covid-19 crisis hit. The world's largest oil producers were trying to get one another to cut supply before demand for oil plummeted due to people staying at home. The combination of oversupply and a steep drop in demand has resulted in a significant price decline. This past weekend the major producers agreed to supply cuts. Although this deal was indeed historic in terms the span of cooperation, it will ultimately prove inconsequential and rather than supporting the price of oil, will actually set up further triggers for even lower prices. Cutting 10 million barrels a day in production in a market that is oversupplied by 30 million barrels does not an equilibrium make. Believing that countries who are heavily dependent on oil revenues and who have been prone to cheat on supply quotas in the past will continue to voluntarily reduce their cash flows for an extended period of time is also wishful thinking. Do not hold your breath for a rebound in oil. All that excess crude has to be stored somewhere and oil tanker charter rates are skyrocketing (limited near term supply, massive demand):

None of what will happen going forward is quite as simple as I have made it out to be, but we are absolutely devoted to clawing back this month's paper losses by evaluating and being ready act upon the opportunities that will emerge from this crisis.

On a final note, I have been working from home since I returned from a trip to London at the start of March. Due to the spread of the Covid-19 virus in the UK, I went into self-isolation for couple of weeks to comply with the instructions of the Republic of Latvia. During my quarantine I had a cold and mild flu-like symptoms. I checked my temperature daily and nothing was out of the ordinary. Before heading back to the office I took a Covid-19 test and was notified a couple of days later that I had tested positive. I was not overly troubled by this news because I figured that if I have been home for all this time, best to get it over with. I look forward to being in the clear next week and to having a tremendous amount of antibodies when this is all said and done (although that is far from certain at this point). I am very thankful that I am amongst those will little ill-effects from this virus and hope that you are all in good health and are as unscathed as you possibly can be in this difficult circumstance.

I am proud of the perseverance of our team at BlueOrange and am especially thankful to Pēteris for providing me with innumerable charts and research reports from our Bloomberg Terminal and for holding down the fort at our office while I am stuck at home.

We value your trust a support and look forward to exiting this crisis stronger than when it began."