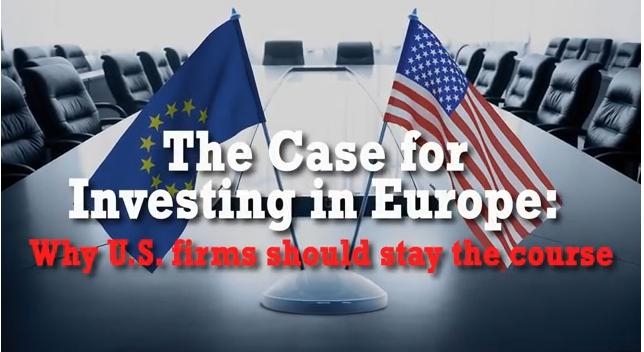 Despite the Eurozone crisis, a new study The Case for Investing in Europe 2013: Why US Firms Should Stay the Course demonstrates that the case for investing in the European market is as strong as ever and Europe remains the most profitable and easiest region to do business for US companies. The crisis has triggered EU-wide structural reforms that will make Europe stronger, not weaker in the longer term. Meanwhile, the European Union remains the largest and wealthiest economy in the world.

The report, written by Joe Quinlan, Transatlantic Fellow at the Center For Transatlantic Relations, Johns Hopkins and the German Marshall Fund, shows that no commercial entity in the world is as large as the one binding the US and Europe together, and the transatlantic economy still accounts for over 50% of world GDP. Europe remains one of the largest economic entities in the world, representing nearly 20% of world output in 2012. Despite 2011 being a challenging year for Europe, the region still accounted for 24% - of total foreign affiliate income for S&P 500 companies, versus 15% for Asia.

The report found many advantages to doing business in Europe. Europe accounts for 25% of global R&D expenditures and produces 17% of global engineering graduates (compared to 4% in the US). Europe also comes out on top when it comes to ease of doing business. According to the World Bank, 12 European economies ranked in the top 25 most business-friendly.

Additionally the countries on Europe's periphery, notably the Middle East, Russia, Turkey and North Africa remain key sources of growth and consumption. Europe's trading links to those countries have deepened and thickened over the past decade to the benefit of US companies operating in Europe.

In addition, the promise held by a possible Transatlantic Trade and Investment Partnership could further solidify the transatlantic economy. "This agreement could be a global game changer. With a big focus on regulatory and standards issues, this agreement could be a gold standard for the removal of non-tariff barriers. A new template for international trade and economic agreements could be a huge benefit of TTIP", stated Quinlan.

To view photos from the event when The Case for Investing in Europe 2013 was launched.