Choosing next mayor of Riga 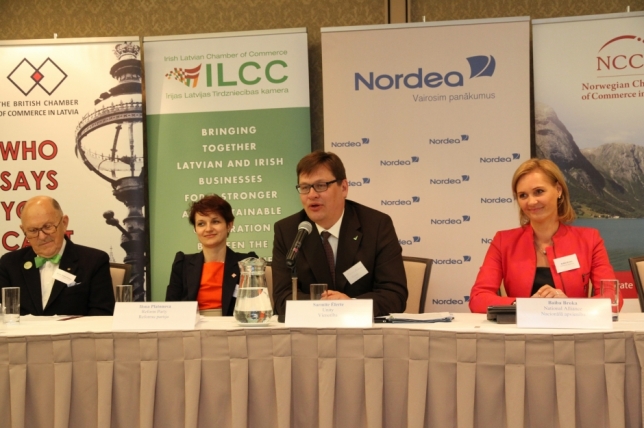 On May 14th, members of 10 foreign chambers met with the mayoral candidates for Riga municipal election 2013 and their representatives to discuss issues important for the investors, entrepreneurs and the entire foreign business community in Riga. Joining the discussion were Baiba Broka, mayoral candidate from National Alliance, representatives Ilona Platonova (Reform Party), Peteris Viņķelis (Unity) and Maris Slokenbergs (Green Party). The panel was moderated by Ivars Ijabs, Associate Professor of Political Science of University of Latvia.

Over 110 entrepreneurs, investors and managers from the American, Belgium, British, Canadian, Dutch, Finnish, German, Irish, Norwegian and Swedish chambers joined the discussion with mayoral candidate Baiba Broka (National Alliance), representatives of mayoral candidates Ilona Platonova (Reform party), Maris Slokenbergs  (Latvian Green party) and Pēteris Viņķelis (Unity). Unfortunately, some of the candidates decided to withdraw their participation at the last minute, despite the fact that their confirmation had been received for more than a month prior to the event with one exception negotiated before.

The foreign business community was most interested in issues that are on the business agenda for investors including reducing bureaucracy, effective, predictable and understandable cooperation among businesses and municipality and goal-oriented all season long  promotion of tourism to Riga, as well as building the image and the offer of Riga to western investors. The local and foreign business community was concerned about many unsolved issues towards environment friendly and safe operations of Riga Free port, efficient management and development of public transportation in Riga, as well as long term investments in health of Riga citizens.

Members of the chambers admitted that mayoral candidates expressed quite similar views. The presentations and answers to the questions did not demonstrate substantial difference in political platforms nor future vision of the city and the strategy of party pre-election promises.

At the end of the meeting foreign business community based on the arguments and position of mayoral candidates during their presentations and discussion, voted for their Riga Mayor candidate. Far majority of votes went for mayoral candidate from National Alliance Baiba Broka.

Attracting investment and improving business environment is one of the top priorities of every party invited to participate in the debate. EU citizens who have registered their residence in Latvia are eligible to take part in the municipal election. We wish to thank the party representatives who took part at the event to share their vision on the economic development of Riga and high value-added investments.