New EU Directive on the way 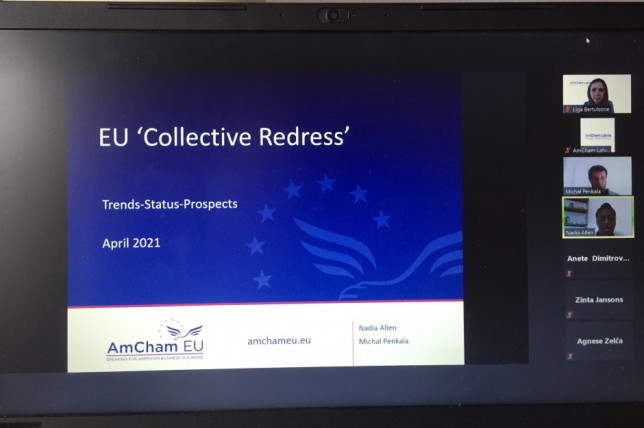 On April 26, AmCham members had an opportunity to join an online discussion on a new EU Directive on the representative actions for the protection of the collective interests of customers - Collective Redress.

Thanks to the introduction of this Directive, consumers across the EU are to be granted broader opportunities for the collective defense of their rights. The directive requires member states to put in place a system of representative actions for the protection of consumers’ collective interests against infringements of EU law. It covers actions for both injunctions and redress measures.

The impacted industries to name a few include ICT companies, automotive manufacturers, package/food/consumer goods companies, direct selling, pharmaceuticals and others.

AmCham EU will give us a briefing on the topic and state of play highlighting some of the potential risks identified in the transposition phase.

About the Collective Redress:
The Directive was initially presented in April 2018 by the European Commission and is part of the European Commission’s “New Deal for Consumers.” The Directive was endorsed by the EU Parliament on November 24, 2020 and provides a harmonized model for representative action in all Member States, which is intended to guarantee consumers suitable protection against mass harm, while ensuring appropriate safeguards to avoid abusive lawsuits. The Directive requires Member States to put in place at least one effective procedural mechanism allowing qualified entities to bring representative actions to court for the purpose of injunction or redress, including a specific right for consumers to claim for injunctive measures and/or compensation. Member states will have 24 months from the entry into force of the directive to transpose it into national law, as well as an additional 6 months to start applying these provisions.

Instructions about how to join will be sent directly to those who have registered.

Open for members only.