What to expect after the election 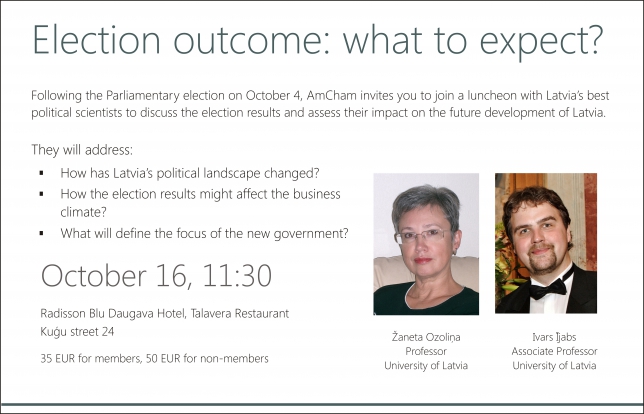 AmCham hosted a luncheon with political scientists Žaneta Ozoliņa and Ivars Ījabs to discuss the Parliamentary election results and their impact on the future development of Latvia. The event took place on October 16 at the Talavera restaurant, Radisson Blu Hotel Daugava.
Ivars Ījabs commented on the domestic context of the election. Although the ruling coalition will continue to dominate the political landscape, the division of power between the coalition partners brings significant changes. According to Ījabs, the main winner of this election is the Alliance of Greens and Farmers which managed to increase its representation in the Parliament by 8 seats. There is still a relatively high demand for populism in Latvia as demonstrated by the success of two splinter parties that together received 15 mandates. Ījabs admitted that experiencing more than one ruling coalition in this coming four-year period is possible. The main policy issues for the new Saeima and government include approval of the budget law, hosting the upcoming EU Presidency and continuing reforms in sectors such as healthcare and education. “Sadly, in the post-election horse trading, these particular ministries are like hot potatoes – nobody is willing to take them,” Ījabs said.
Žaneta Ozoliņa covered international aspects of the recent election. She said that at least four puzzles should have been solved by this election:
1) How big is the mandate of ethnic Russians and Russian-speaking population?
2) Could a new coalition be formed by the Harmony party and Sudraba’s party if they succeded to get slightly over 50% in the election?
3) To what extent Latvia has been influenced by the international events?
4) What role is attributed to the upcoming EU Presidency? The largest question is what will happen after the Latvian Presidency in the European Council is over.
She summed up that from the foreign affairs perspective, Latvia is on the right path, however many questions are still begging to be answered.