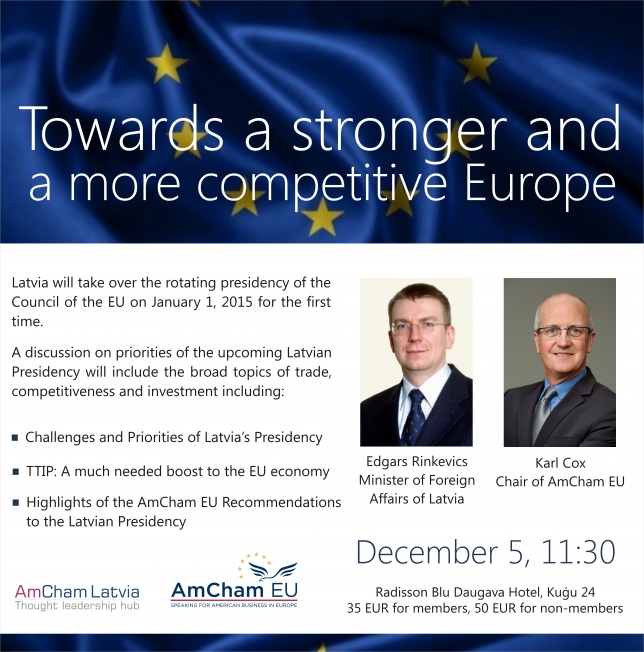 On December 4, AmCham held a monthly business luncheon to discuss the priorities of the upcoming Latvian Presidency of the Council of the EU. Competitive Europe, Digital Europe and Engaged Europe will be the three pillars of the Presidency.

Edgards Rinkevics, Minister of Foreign Affairs addressed members on priorities and challenges of the Presidency. Following the keynote address, Karl Cox, Chair of AmCham EU offered insight into highlights of the AmCham EU Recommendations to the Latvian Presidency. A panel discussion on the Presidency as well as on the current negotiations of Transatlantic Trade and Investment partnership agreement (TTIP) was held between the Minister of Foreign Affairs and the Chair of AmCham EU. The discussion was moderated by Susan Danger, Managing Director of AmCham EU.

1) Competitive Europe - to ensure the competitiveness and growth in the EU;
2) Digital Europe - to encourage the use of European digital potential in the EU development;
3) Engaged Europe - to strengthen the role of the EU as a global actor.

Speaking of TTIP, the Minister said: "Clearly, TTIP is not only a trade deal. It has an enormous geopolitical potential. Year 2015 is a window of opportunity for concluding the talks." He added that Latvia would like to see the issue of energy included in the agreement. Rinkevics stressed the importance of transparency in TTIP negotiations and his full support to Trade Commissioner Malmstrom's commitment to increase transparency.

The luncheon was attended by members of AmCham Latvia and the business delegation from AmCham EU. The AmCham EU delegation was in Riga on a three-day visit to meet with government representatives to discuss the Latvian priorities as well as to present their business recommendations to reach common objectives of a stronger and more competitive Europe. The Recommendations highlights five key areas: skills for the future, integration of the single market, revolutionary change for industrial leadership, new models of innovation and entrepreneurship and Europe's leadership in an integrated global economy.

Recommendations of AmCham EU to the Latvian Presidency.

AmCham EU speaks for American companies committed to Europe on trade, investment and competitiveness issues. It aims to ensure a growth-orientated business and investment climate in Europe.

Edgars Rinkevics became the Minister of Foreign Affairs on October 25, 2011. From 2008-2011 he was Head of the Chancery of the President of Latvia. Earlier he served as a Secretary of State at the Ministry of Defense (1997-2008). Minister Rinkevics holds a Master’s Degree in National Resource Strategy from the U.S. National Defense University, Industrial College of the Armed Forces and a MA in Political Science from the University of Latvia.

Karl Cox is Oracle’s Vice President, Global Public Affairs. Before joining Oracle, he held a number of public affairs positions in the information technology industry over a period of 25 years in both Brussels and Paris. He holds a number of leadership positions in various industry and trade bodies at European level and is also a member of the World Economic Forum Global Agenda Council on Migration. He was elected Chair of AmCham EU in October, 2014. Mr. Cox is a graduate of the College of Europe in Bruges, Belgium and the School of Foreign Service at Georgetown University in Washington, D.C.

AmCham EU is a unique organisation comprised of over 150 companies from a broad range of sectors. AmCham EU speaks for American business committed to Europe on trade, investment and competitiveness issues. It aims to ensure a growth oriented business and investment climate in Europe.