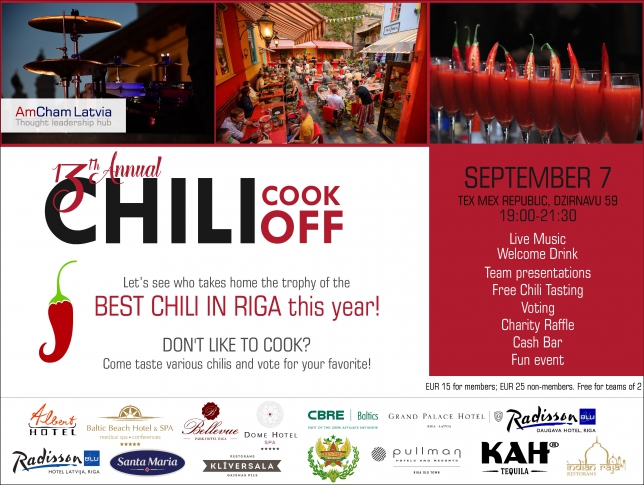 The Restaurant Le Dome team, represented by Sergejs Šiporovs made their Le Dome Chili a winner at the 13th Annual Chili Cook-Off hosted by the American Chamber of Commerce in Latvia (AmCham) on September 7 at Tex-Mex Republic Restaurant.

The Restaurant Le Dome team received the title Best Chili Riga 2017 and a special Chili Pepper Award. In addition, they were awarded a prize from Grand Palace Hotel.

Judging was done blindly by evaluating each chili by aroma, appearance, taste and aftertaste.

8 teams participated in this year's Cook-Off including:

In addition to the chili contest, 700 EUR were raised in the charity raffle in benefit of the Latvian Foster Family Association, SOS Children’s Villages and RMHC Latvija Mobile Health Care Center - organizations striving to promote healthy development of children and a family-based care for children without biological parents.