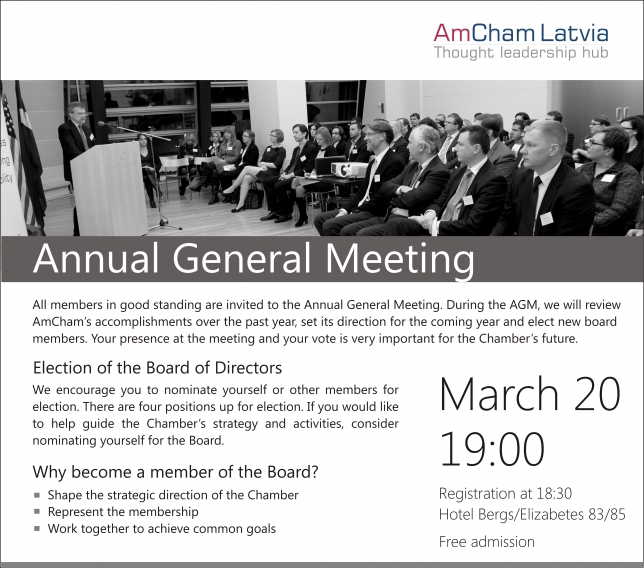 On March 20, AmCham held its 21st Annual General Meeting (AGM) to review the past year’s activities and elect the Board of Directors. The following candidates were elected to serve two year-terms:

Eriks Eglitis, Arnis Kakulis, Matiss Kukainis, Janis Meija and Liga Smildzina-Bertulsone will continue to serve on the board.

U.S. Ambassador to Latvia Mark Pekala opened the meeting with a speech, emphasizing the close cooperation between the U.S. Embassy in Riga and AmCham and outlining the future cooperation. He elaborated on Shared Prosperity, an economic agenda of the U.S. government to foster growth and prosperity around the world. He said: “Improving the global business environment and increasing international trade and investment are the heart of Shared Prosperity. AmCham and our Embassy are strong allies in achieving this goal.”

He added: “Nothing could be more important to the United States and the EU right now than the Transatlantic Trade and Investment Partnership, or TTIP.  TTIP will be an ambitious, comprehensive, and high-standard trade and investment agreement that offers significant benefits in promoting U.S. and EU international competitiveness, jobs, and growth.”

AmCham President Ivars Slokenbergs outlined the Chamber’s accomplishments of the past year and the goals for the next year. He said that AmCham has continued to serve as a vibrant forum for exchanging views, networking and connecting with key decision makers. According to Slokenbergs, 2013 was a flagship year for AmCham Latvia maintaining its thought leadership position throughout.

Thank you! On behalf of all members, we sincerely thank Ivars Slokenbergs, who has now stepped down, for his contributions to the Chamber over the past six years of service and in particular for his role as the President over the last four years. We would also like to thank Aleksis Karlsons for his time and efforts on the Board over the last six years.

The Board of the American Chamber of Commerce in Latvia for 2014-2015 consists of: