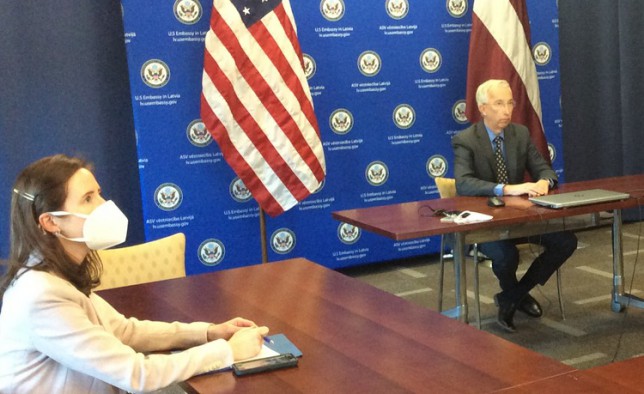 On March 10, AmCham held its 29th Annual General Meeting to review the past year’s activities, elect the Board of Directors and make other important decisions for the business continuity. Zanda Kalnina-Lukasevica, Parliamentary Secretary of the Ministry of Foreign Affairs and U.S. Ambassador Carwile opened the meeting with remarks focusing on the current Ukraine-Russia war.

Zanda Kalnina-Lukasevica, Parliamentary Secretary of the Ministry of Foreign Affairs of Latvia addressed AmCham members and said: “In this dark moment, cooperation between true friends and allies is vital. We draw courage from the unity the world has shown in the face of such brutal aggression. We are grateful to our closest allies and U.S. leadership for their unwavering support to Ukraine, as well as their contribution to fortifying defense and deterrence in Latvia and throughout NATO’s eastern flank.”

John L. Carwile, U.S. Ambassador to Latvia thanked AmCham Latvia for close cooperation and partnership with the U.S. Embassy and noted that as we face the reality of Russian aggression, relations between the United States and Latvia are stronger than ever.

AmCham President John Tully and Vice Presidents Ieva Racenaja, Roberts Melbardis, Pauls Miklasevics and Liene Dubava outlined the Chamber’s accomplishments over the past year, addressed the goals for the next year and introduced  the following policy priorities AmCham will be focusing on going forward:

The AGM highlighted the importance of commitment and engagement of members, which has even a more significant role under the current unprecedented circumstances with the situation in Ukraine.

The following individuals were elected to the Board to serve a term of two years:

Members also elected auditor Orients Audit & Finance for 2022 and the Nominating Committee for one year.