AmCham selects new Board and President 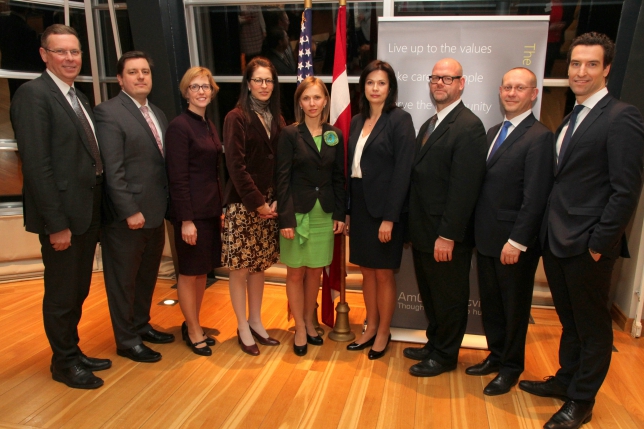 On March 12, AmCham held its 22nd Annual General Meeting to review the past year's activities and elect the Board of Directors. The following candidates were elected to serve two year-terms:

Today at the Board meeting following the Board election, the Chamber's officials were selected. Arnis Kakulis was elected as the Chairman of the Board and President for 2015-2016. Eriks Eglītis, Ingrida Karina-Bērzina and Janis Meija were elected as Vice Presidents for the next year.

Arnis is the Director of the Baltic Region for AECOM. He is also currently the AECOM Transportation business line leader in the Baltics and the AECOM Global Account Manager for Microsoft real estate projects. Previously, in his 8-year tenure with OWP/P, a Chicago-based 300 person multi-disciplinary architecture, engineering and consulting services firm, Arnis was a Principal and the Director of the Consulting Practice, specialized in the business development and management of corporate, health-care and education projects. Arnis earned both his Master of Architecture and Master in Urban Planning at the University of Wisconsin-Milwaukee School of Architecture and Urban Planning.

Arnis Kakulis said: "AmCham has always been a very pro-active organization facilitating thought leadership among its membership and as such providing a forum for sharing best practices to the government, the business community, and the citizens of Latvia. I embrace the challenge to assist AmCham and its members to share their insights and experiences to continually improve the development of not only the business climate of Latvia, but to improve the overall demographic and socio-economic context of the Baltic region."

To read the remarks of Sharon Hudson-Dean.

During the AGM, Matiss Kukainis outlined the Chamber's accomplishments over the past year. Arnis Kakulis addressed the goals for the next year and emphasized the following policy priorities: enhancing transatlantic trade, strategies in response to demographic change and improving the competitiveness and business environment in Latvia.

The Board of the American Chamber of Commerce in Latvia for 2015-2016 consists of:

To view the presentation of AmCham Overview of 2014.

To view the AmCham Annual Review of 2015.