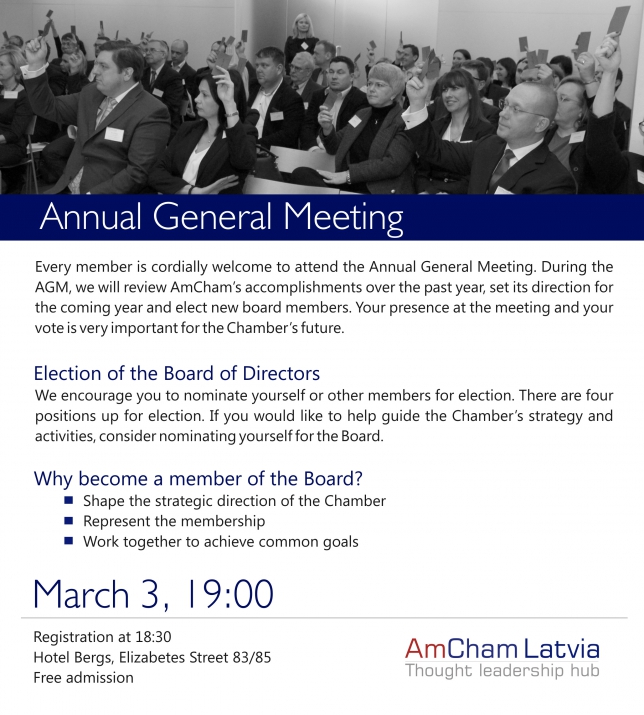 On March 3 AmCham held its 23rd Annual General Meeting (AGM) to review the past year’s activities and elect the Board of Directors. The following candidates were elected to serve two year-terms:

Ēriks Eglītis, Arnis Kākulis, Jānis Meija, Līga Smildziņa-Bērtulsone, Eric Michael Trusiewicz will continue to serve on the board for one more year.

Daiga Auzina-Melalksne, Chair of the Management Board of NASDAQ OMX Riga resigned from the Board after six years of service. She served as a Board Member from 2010-2016.

At the next Board meeting following the Board election, the Chamber's officials were selected. Arnis Kakulis was re-elected as the Chairman of the Board and President for 2016-2017. Ēriks Eglītis, Ingrīda Kariņa-Bērziņa, Jānis Meija and Eric Trusiewicz were elected as Vice Presidents for the next year.

Nancy Bikoff Pettit, U.S. Ambassador to Latvia opened the meeting with a speech, emphasizing the close cooperation between the U.S. Embassy and AmCham, and outlining the future cooperation. She said: "With the formation of a new government, new decision-makers are set to bring fresh perspectives and energy to bear on these issues. This is a moment of opportunity for Latvia. Both AmCham – and you as individuals – are well equipped to press for change. So tonight I call on you to take action – engage local universities and tell them what skills their graduates need to have.  Advocate for government investment in education and health, in ways that show tangible benefits. Encourage banks to increase lending to small businesses.  Support better financial regulation to secure Latvia’s economic future. And insist on efforts to fix the insolvency administration system and strengthen the rule of law." To read the entire speech of the U.S. Ambassador to Latvia click here.

During the AGM, Arnis Kakulis outlined the Chamber’s accomplishments over the past year. He addressed the goals for the next year and emphasized the following policy priorities: enhancing transatlantic trade, improving the competitiveness and business environment in Latvia and strategies in response to demographic change.

The Board of the American Chamber of Commerce in Latvia for 2016-2017 consists of:

Being an AmCham member is a great opportunity of interacting with other members about business & market dynamics in Latvia and in all Baltic states. Looking forward to collectively supporting our future, particularly in the areas of talent sustainability and business progress.