AmCham selects new board and officials 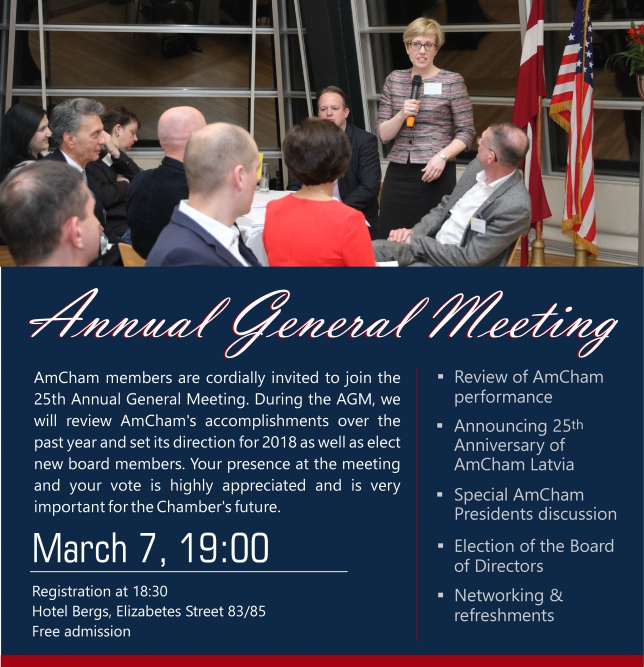 On March 7, 2018, AmCham Latvia held its 25th Annual General Meeting (AGM) to review the past year's activities and elect the Board of Directors. The following candidates were elected to serve two year-term:

Eriks Eglitis, Zinta Jansons, Arnis Kakulis, Janis Meija and Liga Smildzina-Bertulsone will continue to serve on the board.

Today, on March 8 during the first board meeting after the AGM new officers were elected. Eriks Eglitis, individual member was elected as the Chairman of the Board and President of AmCham for 2018-2019.

Liene Dubava, Arnis Kakulis, Zinta Jansons and Janis Meija were elected as Vice Presidents of AmCham for the next year.

Paul Poletes, Deputy Chief of Mission of U.S. Embassy Riga opened the meeting with a speech, emphasizing the close cooperation between the U.S. Embassy and AmCham, and outlining the future cooperation.

The opening was followed by a panel discussion between AmCham Presidents who looked back at AmCham's accomplishments and role in Latvia as well as set the course forward:

During the AGM, Eriks Eglitis outlined the Chamber's accomplishments over the past year. Eriks Eglitis addressed the goals for the next year and emphasized the following policy priorities: enhancing transatlantic trade, improving the investment and business environment in Latvia and preparing the future labor force in Latvia. Mr. Eglitis stressed that: "AmCham is a member-driven organization, therefore member's activity and input is extremely important to the shared success." He added that: "It has been an active year for AmCham, and we have continued to stand up for our values, we have taken the lead in accomplishing our goals and we have continually striven to uphold excellence in all our operations".

The Board of the American Chamber of Commerce in Latvia for 2018-2019 consists of: