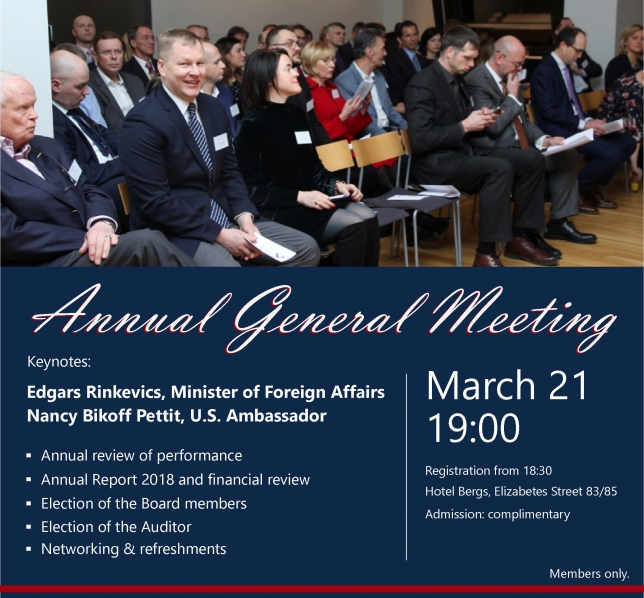 Yesterday, AmCham held its 26th Annual General Meeting (AGM) to review the past year’s activities and elect the Board of Directors. The following candidates were elected to serve a two year-term:

AmCham President Arnis Kakulis, Managing Director Baltic region of AECOM resigned from the Board due to the end of his term limits. He served as a Board member from 2013-2019, including as President in 2015-2017 and 2018-2019 and as Vice President in 2014-2015 and in 2016-2017. We have witnessed an incredible engagement and leadership visible to all of us during the events and meetings, but also behind the scenes – never being too busy to respond and attend to various matters on a daily basis. Arnis has shown a great sense of responsibility and dedication in making AmCham a stronger and better organization for all its members. He will be a very hard act to follow. On behalf of the entire membership, board and staff we would like to thank Arnis for his tremendous service and wish the best in his future endeavors!

Vice President Janis Meija who served on the board in 2013-2019 also resigned after six years of service. We would like to sincerely thank Janis for his active involvement as a Board member and as a Vice President for Membership and Programs. He has devotedly developed the Chambers programs and assisted staff in their efforts to ensure the events run smoothly and stay relevent. Thank you, Janis for your time and great contribution to the Chamber!

On March 26 the new board will elect new officers.

Nancy Bikoff Pettit, U.S. Ambassador to Latvia opened the Annual General Meeting with a speech, emphasizing the close cooperation between the U.S. Embassy and AmCham, and outlining the future cooperation. According to the Ambassador, “You are on the front lines of the efforts to strengthen the economy, to engage your government on critical reforms and to promote the transatlantic relationships that make both our countries stronger and better.”

Andris Pelss, State Secretary of the Ministry of Foreign Affairs delivered remarks on the occasion of the AmCham 26th Annual General Meeting on bilateral relations between Latvia and the U.S. He said: “At this moment we have the best practical cooperation in security area ever, including funding of our security program and, increasing our military capabilities. As to economic cooperation we have an excellent base, and the sky is the limit.”

Arnis Kakulis outlined the Chamber’s accomplishments over the past year. He introduced a vision statement which aims at bringing positive change in the business and investment environment of Latvia. The vision states: “AmCham drives change for a sustainable and transparent business environment. Latvia is a trusted destination for American and international business.” AmCham President addressed the goals for the next year and introduced the following policy priorities AmCham will be focusing on going forward: enhancing transatlantic trade, attracting international talent – Latvia as a career destination and improving the investment and business environment in Latvia.

The Board of the American Chamber of Commerce in Latvia for 2019-2020 consists of: