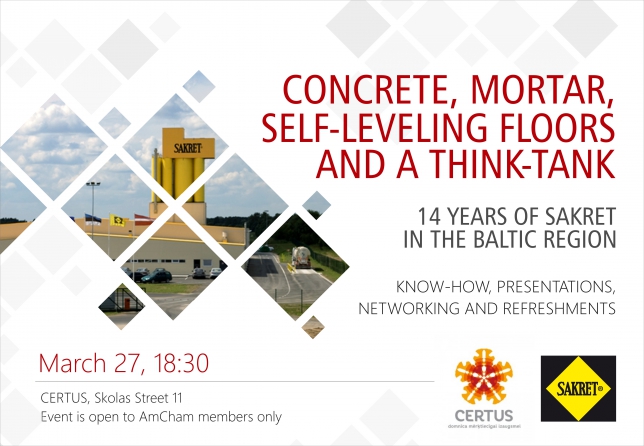 March Business After Hours were hosted by Sakret in cooperation with the think tank Certus on March 27, 18:30 at CERTUS headquarters (Skolas Street 11).

Andris Vanags, the Chairman of Sakret Holdings, told about companie's success in Latvia and abroad and explained why a manufacturer of concrete, mortar and self-levelling floors supported the development of a think tank. Dr Vjaceslavs Dombrovskis, Chairman of the Board of Certus told how the think tank came about and what are its main aims while Dr Daunis Auers, Certus Research Director, introduceed AmCham members to the Certus’ research and advocacy agenda.
ABOUT SAKRET & CERTUS

Sakret, a Latvian-owned licensed manufacturer of building materials, was founded in 2003 and completed construction of a new manufacturing facility in the Riga district of Rumbula the following year. Sakret has gone on to open a new manufacturing plant in Estonia in 2007 and another in Lithuania one year later, both of which are among Latvian companies’ largest foreign direct investments over the last decade. Two years ago Sakret joined a number of Latvian businessmen and enterprises in founding Certus.

Latvia needs to focus on improving the competitiveness of national industries. Continuing along the current path of moderate economic growth, Latvia will never converge with the European Union average level of prosperity. People will continue to emigrate in search of a better life, whilst those that remain will bear an ever increasing social and economic burden. Only sustained economic growth can bring Latvia out of this negative cycle.

This can be achieved with a united effort. Certus think tank will develop and advocate policies that are based on a constructive dialogue that brings together the knowledge and experience of academic researchers and both the private and public sectors. These policies will push Latvia towards economic growth by balancing liberal market economy principles with considered and focused state support.

Certus is the first think tank in Latvia to be 100% privately funded and includes representatives of all leading sectors of the Latvian economy – pharmaceuticals, ICT, timber, finance, and agriculture amongst others.