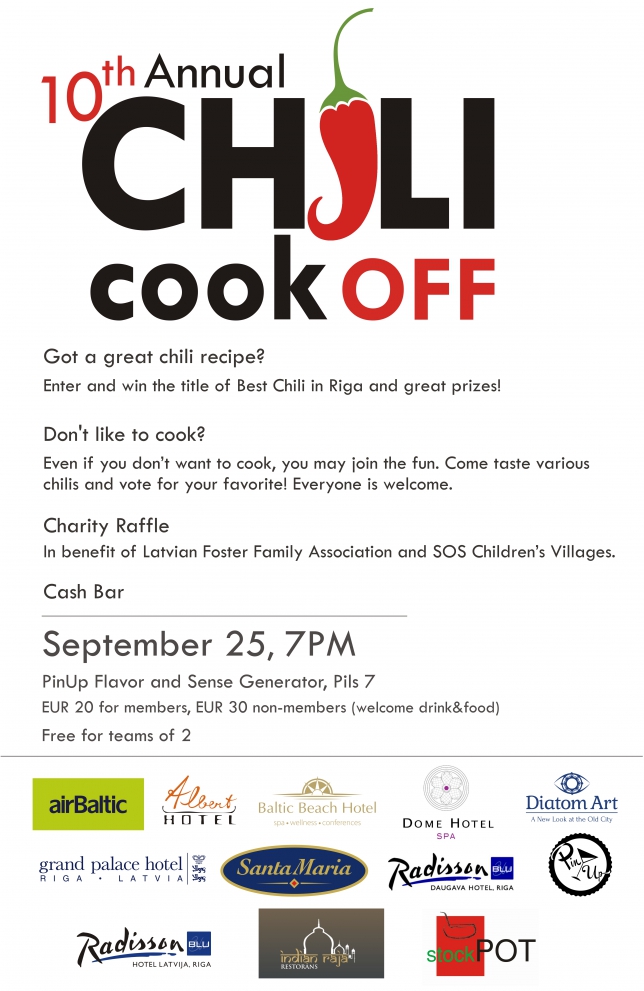 The Drupa team, represented by Viesturs John Drupa and Mara Bertina made their chili a winner at the AmCham's 10th Annual Chili Cook-Off on September 25 at the restaurant PinUp.
After winning 2nd place for three consecutive years, the Drupa team finally made it with their Banditos Chili. The Drupa team received the title Best Chili Riga 2014 and a special Chili Pepper Award. In addition, they were awarded prizes from Radisson Blu Hotel Ridzene and Albert Hotel. The Drupa family also received Naga Ghost or Bhut pepper, which is said to be the hottest chili in the world.
Asked about his winning recipe, Viesturs John Drupa put it down to three basic ingredients: good local food, spices from all over the world and love. “Good chilli is made with love. It is as simple as that,” Drupa was concise.
2nd place was awarded to the LAWIN team for their License to Chill. 3rd place went to the Albert Hotel team for their Spiciness formula Chili.
Justin Bancroft with Cinncinati Chipotle Chili won People’s Choice Award determined by the public vote.
Winners received generous prizes from Albert Hotel, Baltic Beach Hotel, Grand Palace Hotel, Radisson Blu Hotel Daugava, Radisson Blu Hotel Latvija and Santa Maria.
The jury consisted of expert chili tasters and chefs: Sharon Hadson-Dean, Charge d’Affaires of the U.S. Embassy; Matīss Kukainis, last year’s winner and President of AmCham, Richard Johnson, Chef of Restaurant StockPot and Karlis Roberts Celms, American Chef and Owner of the restaurant Tvaiks. Judging was done anonymously by evaluating each chili by aroma, appearance, taste and aftertaste.
The Annual Chili Cook-Off has become a traditional autumn event where AmCham members and friends compete for the Best Chili in Riga award.
8 teams participated in this year’s Cook-Off including:
In addition to the chilli contest, 580 EUR were raised in the charity raffle in benefit of the Latvian Foster Family Association and SOS Children’s Villages – organizations striving to promote healthy development of children left without their biological parents and a family-based care. The charity raffle was supported by airBaltic, Dome Hotel & SPA, Diatom Art, Indian Raja, Microsoft Latvia, PinUp and StockPot.