Truth, lies and the media 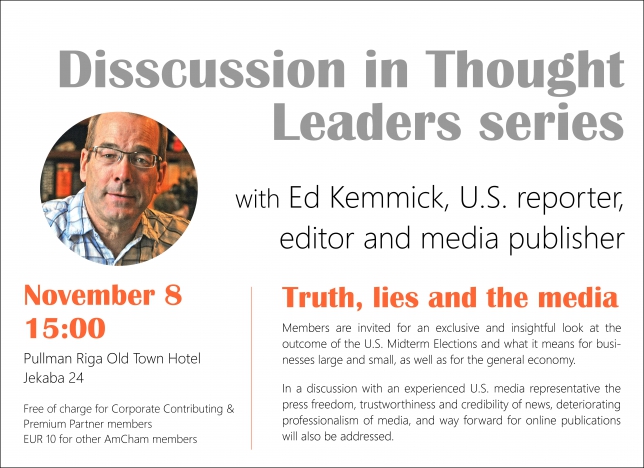 On November 8, members joined the discussion in Thought Leaders series with Ed Kemmick, U.S. reporter, editor and media publisher with over 40 years of experience who shared some highlights from his long and successful career in printed publications to starting and running online-only newspaper "Last Best News".
Mr. Kemmick offered an insightful look at the press freedom, trustworthiness and credibility of news, quality of media, and the future of digital journalism.
During a very frank and open discussion the impact of the U.S. Midterm Elections was also addressed.
About the Speaker
Ed Kemmick worked as a reporter, editor, columnist and online newspaper publisher for almost forty years in Minnesota and Montana. He began his career as a bureau correspondent for the (Butte) Montana Standard, worked at the same paper as an editor, and then went back to his home state of Minnesota to work for five years as the editor of two newspapers, one a monthly publication and the other a twice-monthly.
In 1989, he moved back to Montana to work for the Billings Gazette, the largest daily newspaper in the state, where he was an editor for seven years before going back to reporting in 1996. In addition to his work as a reporter, he was also the newspaper's general-news columnist as well as its first blogger. He left that newspaper late in 2013 to found Last Best News, an online newspaper. Though other people contributed content to the site, Kemmick did most of the reporting and photography for Last Best News, while also writing a weekly column, editing and laying out stories, selling advertising and keeping the books. Last Best News was the focus of several articles in the Columbia Journalism Review and it broke stories that were carried by newspapers across the United States. Kemmick ceased publication of Last Best News and retired on July 1, 2018.
He is also the author of "The Big Sky, By and By," a collection of his newspaper work. He and his wife, Lisa, have three children and two grandchildren.