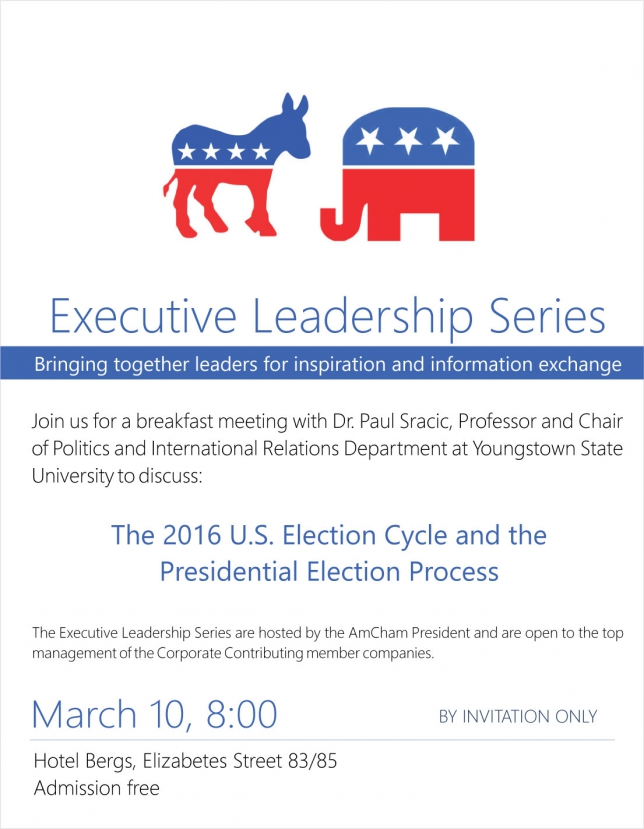 Our top-tier members met with Dr. Paul Sracic, Chair of Politics and International Relations Department at Youngstown State University to discuss the 2016 U.S. Election cycle and the Presidential election process.

The Executive Leadership Series events are hosted by the AmCham President and are open to the top management of the AmCham premier level member companies.

An expert on American politics and elections, Dr. Sracic is a frequent contributor to the op-ed pages in the United States.  His articles on American and international politics and law have appeared in The Washington Post, USA Today, Bloomberg, Inside Higher Ed., The Atlantic.com, and Cnn.com.  He also appears regularly on broadcast media and has been interviewed for CNN and NPR.  In 2015, he recorded a TEDx talk entitled Ohio, the Swing State.

Dr. Sracic holds a Ph.D. and M.A. in Political Science from Rutgers University, and an A.B. in Political Science and Economics from Albright College.  He is the author of Ohio Government and Politics (co-authored with William Binning) (2015), and San Antonio v. Rodriguez and the Pursuit of Equal Education (2006), among others. He lectures frequently on U.S. elections to international audiences and has spoken in Tokyo, Beijing, and Brussels. In 2009, Dr. Sracic spent a year teaching at the University of Tokyo as a U.S. Fulbright Scholar.