Doing the most good 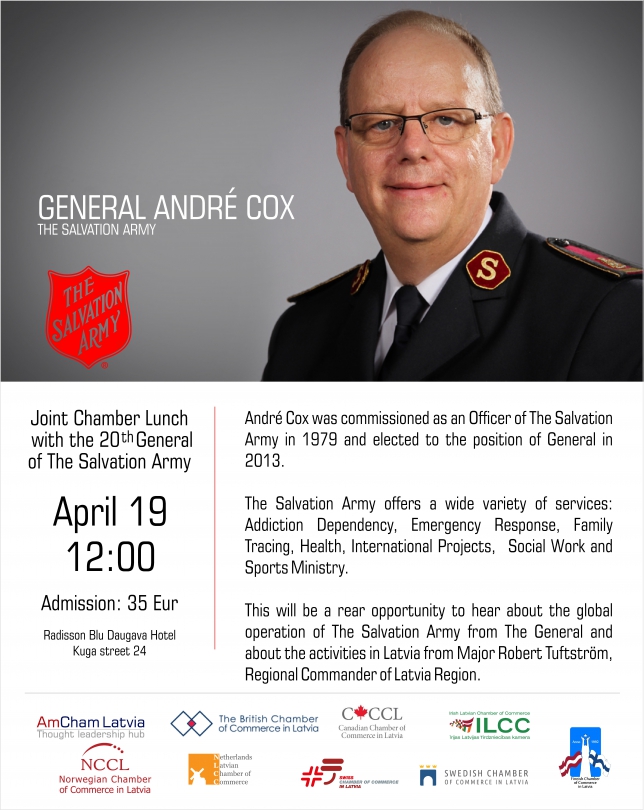 On 19 April members of the British, American, Canadian, Irish, Finnish, Netherlands, Norwegian, Swedish and Swiss Chambers of Commerce met at the Radisson Blu Daugava Hotel for the Joint Chamber Lunch with André Cox, The 20th General of The Salvation Army.

To support The Salvation Army the Ambassadors of Estonia, Finland, France, Sweden, Switzerland, United Kingdom and representative from the Embassies of Lithuania also attended the event.

The guests were addressed by the General and the regional leader Robert Tuftström. It was a chance to hear about the global structure, approach and goals of one of the largest charity organizations, as well as the history and progress of the local chapter.

History of Salvation Army in Latvia starts in 1923 when it was initially established in Jelgava. The work flourished for 20 years and spread over the country, starting churches and saving lives through its social work. In 1990 The Salvation Army was allowed to open up official work in Latvia again. Today in Latvia the organization has: 23 Officers (church leaders) and 396 members; 14 churches, 7 social institutions; 11 soup kitchens and more.