Priorities for the new Saeima 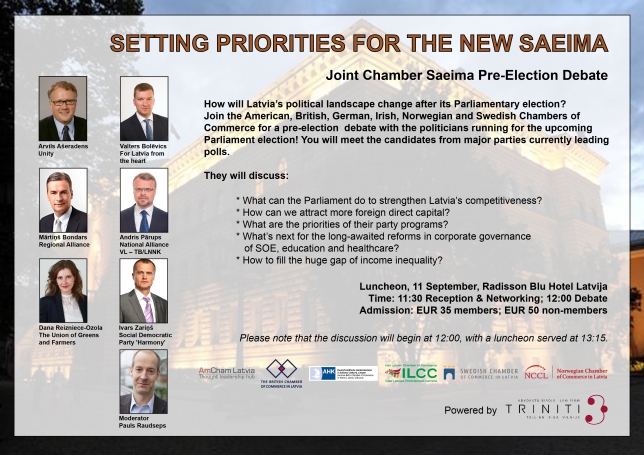 The American, British, German, Irish, Norwegian and Swedish Chambers of Commerce in Latvia hosted a pre-election debate themed “Setting priorities for the new Saeima”. The event took place on September 11 at the Radisson Blu Hotel Latvija.

This was an opportunity for foreign investors and voters to find out how Latvia’s political landscape will change after its Parliamentary election on October 4.

Joining the luncheon were the following candidates from major parties leading the polls:

Discussion was moderated by Pauls Raudseps, Chairman of the Board of Cits Medijs and Journalist of the Latvian weekly magazine IR.

The candidates addressed what should be done in order to strengthen Latvia's competitiveness, raise more FDI and what they could do about the long-awaited reforms in corporate governance of SOE, education and healthcare.

According to Igors Pimenovs, in order to increase competitiveness, foreign trade balance has to be improved by reducing the dependence of imports and increasing the significance of domestic goods and services.

Andris Parups said that in order to boost competitiveness the industrial policy will continue to serve as the basis of the next EU planning period. The most important priority is to ensure a stable and predictable political environment, which is key to attracting investments.

Martins Bondars stressed the importance of trust: “We are dealing with the issue of trust, both trust of Latvian people to this country and trust of capital.” Healthcare, education and jobs are the main priorities for the Regional Alliance so that people stay in Latvia.

Three main objectives of the party represented by Valters Bolevics are restoring citizens’ confidence to the state, the growth of the economy, independence and security.

Gatis Abele emphasized the necessity to make Latvia an attractive and predictable destination for foreign capital. His party plans to achieve this by improving regional infrastructure, upgrading the educational system, particularly vocational education, and improving the energy policy.

Arvils Aseradens said that currently there are almost no new investments arriving due to the current security crisis. In order to increase the competitiveness, the low level of productivity and structural unemployment should be addressed. The party’s main priorities are regional security, domestic security and facilitation of sustainable economic development, achievable by the industrial policy and innovation.

The luncheon was powered by the Law Office TRINITI.