Who will be the next president? 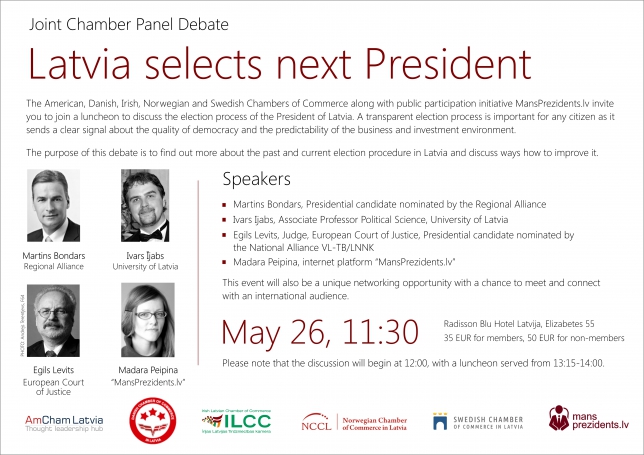 On May 26 the American, Danish, Irish, Norwegian and Swedish Chambers of Commerce along with public participation initiative MansPrezidents.lv gathered to discuss the election process of the President of Latvia.

The purpose of this debate was to find out more about the past and current election procedure in Latvia and discuss ways how to improve it.

Joining the event were the following speakers:

The event was moderated by Ivars Ijabs who compared the election process with a football game and black box with an unpredictable result.

Martins Bondars was convinced that strong president and strong leadership ensures a strong country. He would offer three directions for the potential president to develop: issues of national security, economic growth and regional policy.

According to Egils Levits, Latvia has a parliamentary democracy and with real executive powers lying in the hands of the Prime Minister, however President is like an intellectual leader of the nation. "I will organize a very strong team and will support the government in different and difficult situations. It also means unpopular decisions related to political and economic policy," Levits said.

According to Madara Peipina who is also a founder of an e-petition platform Manabalss, election process should be much more open and public. She explained that the results of public vote will be submitted to the parliament just before the election on June 3, 2015.