Fighting the Corruption for a Predictable Business Environment 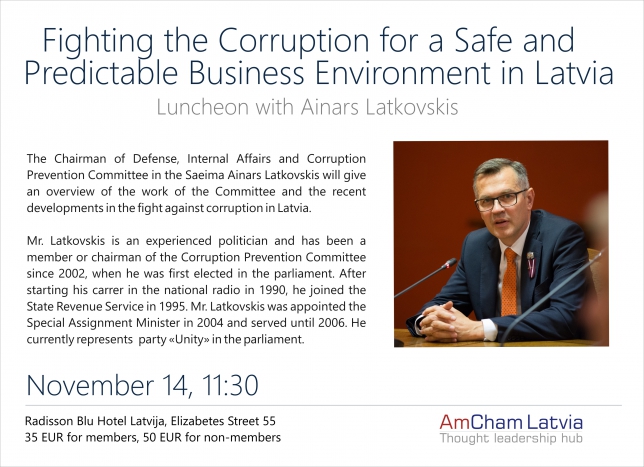 25 members and guests attended the luncheon with Ainars Latkovskis, Chairman of Defense, Internal Affairs and Corruption Prevention Committee in the Saeima on November 14 at Radisson Blu Hotel Latvija.

Mr. Latkovskis gave an overview of the work of the Committee and discussed the recent developments in the fight against corruption in Latvia with the anti-corruption expert Inese Voika. The opening part was followed by an active and informative Q&A session.
Members were interested in the progress made by the Corruption Prevention and Combating Bureau of Latvia, the challenges for the new Head of the Bureau as well as Latvia's ranking in different corruption index measures, and other issues.

Ainars Latkovskis is an experienced politician and is currently the Chairman of Defense, Internal Affairs and Corruption Prevention Committee. Mr.Latkovskis has obtained a Certificate in Political Science from University of Umea, Sweden, a Diploma in History from University of Latvia and he holds a Master’s degree from George Washington University, United States.

Mr. Latkovskis has started his career at the Latvia’s Public Radio, where he served as a Journalist in the crucial time of 1990 – 1991. After spending a few more years in radio, he joined the State Revenue Service in 1995, where he served as the Head of International Unit for two years and the Head of Customs Modernization Management Division for five years.

In 2002 Mr.Latkovskis was elected member of the 8th Saeima from the “New Era Party” list and took on the position as the Chairman of Anti-Corruption Committee. Mr. Latkovskis was appointed the Special Assignment Minister in 2004 until 2006, when he was reelected in the parliament and continued to be a member of the Defense, Interior and Corruption Prevention Committee. He was reelected again in 2010, in the early parliamentary elections in 2011 and in 2014 as a member of party “Unity”. He was reappointed Chairman of Defense, Internal Affairs and Corruption Prevention Committee in 2014.

Inese Voika to continue the conversation. Inese Voika is a good governance and leadership adviser. She has worked to take on the challenges of corruption in Latvia as the civil society activist for the last, soon, 20 years. She was the founding president of the international anti-corruption movement Transparency International in Latvia and later has served on the international Board of Transparency. Inese has worked with the governments of Eastern Europe, as well as international organization such as the World Bank and OECD. Inese is a long term partner with the AmCham Latvia and has hosted some of our conferences before.