A view from Brussels 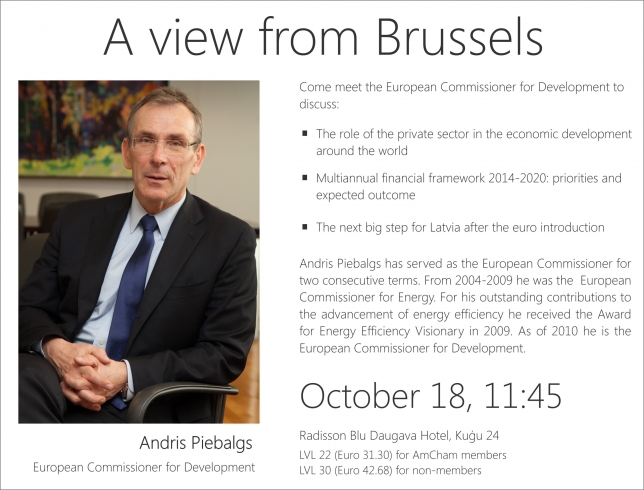 On October 18th AmCham members met with Andris Piebalgs, European Commissioner for Development to discuss the role of the private sector in the economic development, the Multiannual financial framework for 2014-2020 and the next goals for Latvia.

The Commissioner addressed sustainable development as one of his top priorities. The role of the private sector in poverty reduction is critical as it promotes the rule of law and democracy, ensures economic growth and creates job opportunities. “The key issue is employment both in the developed and the developing world. Promoting and creating jobs can only be done through the private sector,” he stressed.

The Commissioner highlighted the stability corridor gained by Latvia as a result of its accession to the Eurozone, which will bring many benefits. “I am proud of Latvia’s achievement. I believe Latvia should become an active Eurozone member by not only pursuing its national interests, but also promoting common goals,” he said.

Another important idea Commissioner Piebalgs emphasized was regaining self-confidence, which has been seriously affected by the crisis. In order to do so, Europe should be competitive and the multiannual budget should serve the following purposes: increasing competitiveness, stimulating R&D and innovation and connecting Europe. According to the Commissioner, the Euro accession has increased Latvia's clout in Europe as it becomes one of the decision-makers within the Eurozone.

The Commissioner answered on a wide array of questions from poverty and inequality to energy security, from reforms in the education system to high emigration levels.