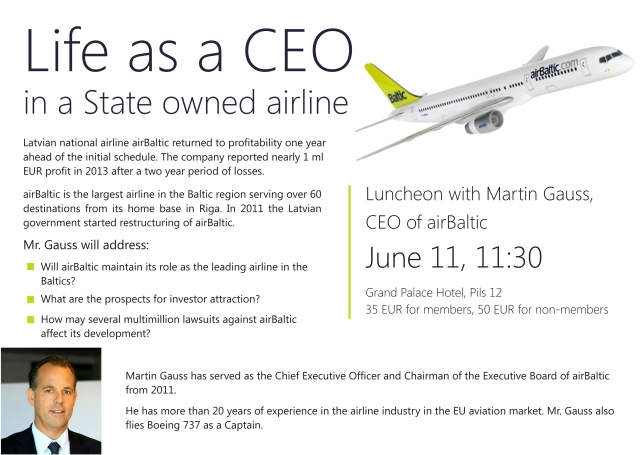 Having stepped in as the CEO of the largest airline in the Baltics when times were difficult, Martin Gauss has a reason to be proud now. In 2012 he introduced a new reshape strategy to improve the financial position of then-troubled company, which started to pay off just a year later as airBaltic returned to profitability in 2013.
At the June luncheon Mr. Gauss spoke to AmCham members about the governance and management of airBaltic as well as about the future development of the company. Over the past two years, a new management process has been implemented from the way top management and Board meetings are held in accordance with good corporate governance principles to a serious review of hundreds of “fishy” contracts concluded before. Every week the management team conducts KPI reviews: “Today we are run as a private company with a proper management,” he told.
Mr. Gauss explained that cost cutting can be challenging, especially, if it has to be done for several years in a row. Thanks to prudent and careful management of this process, however, last year airBaltic was able to achieve a positive net result – one year ahead of the initial schedule.
Speaking of a series of ongoing lawsuits, the CEO of airBaltic is a realistic optimist and before jumping to conclusions urges everyone to look at the company’s performance.
The future development and possible expansion of the airline depends on the access to financing and the ability to attract investment. According to Mr. Gauss, over the next few years, airBaltic is set to become a smaller, yet a better and more efficient airline than it is today. He stated: “We want to grow, but only when the finances allow it.”
Asked about the current challenges, airBaltic’s CEO named the lack of political will to make strategic decisions, in particular, during the pre-election time, which may further affect business decisions.