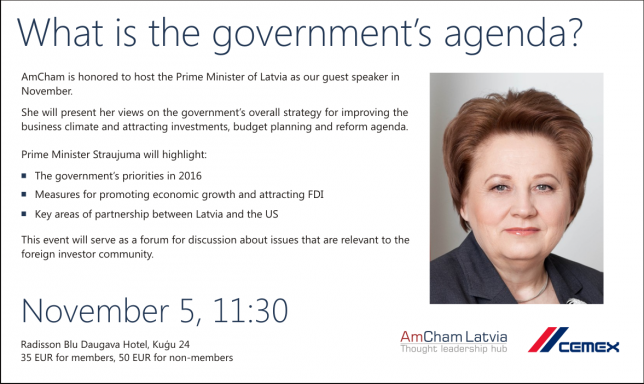 On Thursday, November 5, Prime Minister Laimdota Straujuma met with members of AmCham to discuss the main priorities on the goverment’s agenda, reform plans and partnership between Latvia and the United States.

The Prime Minister emphasized that the US is the strategic ally of Latvia enjoying strong military cooperation. According to her, there is great potential for strengthening the economic relations.

Increasing Latvia’s economic competitiveness, implementing reforms in the areas of education, health and justice, and strengthening internal and external security are among the government’s key priorities for the next year.

In order to increase the competitiveness, the governement will continue the fight against corruption, the so-called grey economy and economic crimes. With regards to the justice sector, it is planned to speed up court proceedings and improve the insolvency process. In the education sector, quality and efficiency criteria will be introduced in order to raise the general skill level of the population. In the health sector, the gornment will facilitate access to healthcare and will work toward introducing compulsory social insurance.

Speaking about the economic partnership with the US, the Prime Minister focused on the Transatlantic Trade and Investment Partnership (TTIP), stressing it will promote the development of Latvia’s economy and increase employment. She said: “I strongly support TTIP. I don’t see another possibility for the EU and the US to increase growth.” The Prime Minister also mentioned the necessity to strengthen energy security in Latvia.

During the discussion, the Prime Minister explained her reasons for dismissing Transport Minister on November 4: “airBaltic works well, there is a great team and they will likely end this year with a profit. However, airBaltic is still recovering from the crisis and they have not been able to turn around the negative equity situation they have which is why it's been important to find a strategic investor. We will now be actively looking for a real strategic investor”.

Asked about the necessity to establish an economic representation in the United States, the Prime Minister indicated that appointing a trade representative at the Latvian Embassy in the U.S. is currently under discussion at the Ministry of Foreign Affairs.

Among other issues discussed were negative demographic trends, labor shortage, taxation policy, fight against corruption and reduction of the shadow economy.