The Recovery and Resilience Facility: Opportunity for a leap forward 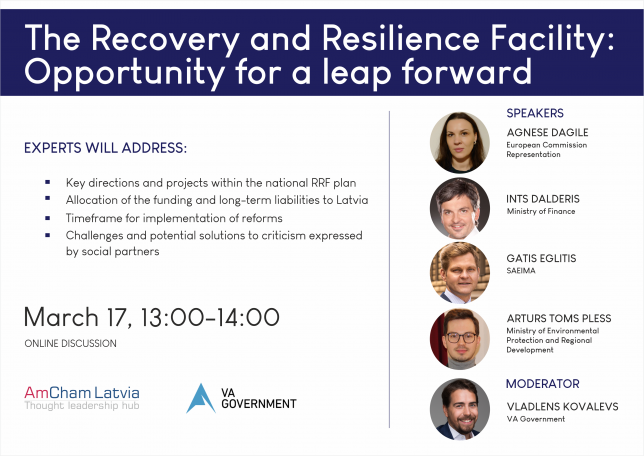 The Chamber had an opportunity to invite members to an online discussion devoted to a topical theme of the Recovery and Resilience Facility that foresees investments for green transformation and digital transition, sustainable transport and digital infrastructure.

Experts of the discussion:

Experts touched upon key directions and projects within the national RRF plan, allocation of the funding and long-term liabilities to Latvia, timeframe for implementation of reforms as well as challenges and potential solutions to criticism expressed by social partners.

Agnese Dagile: "Brave attitude, digitalization and green thinking together with innovative methods is our road to a better future and quality of life. Not all projects have to cost a lot – futuristic ideas and improved digital skills can cost little, but give us a world."

Ints Dalderis: "An important task is to explain to the wider public that this money is not to be divided for our needs, but it's rather an instrument that supports very specific reforms. The question is how we could invest in the best way to help implement these reforms."

Arturs Toms Pless: "It is really good that at this stage we have difficult discussions among the political parties because the leading parties also represent different parts of the society. I think this complex process with political and social partners will result in a balanced discussion so we can make the best of this plan."

Gatis Eglitis: "The public officials are very much in the driver's seat of creating this plan. This creates some kind of continuity to ensure that these ideas are implemented in the long term, but the downside is the lack of new, brave, innovative ideas coming in through this plan."

According to experts of the discussion, it is planned to allocate the RRF investments for the implementation of the following structural reforms: sustainable transport as well as in the fields of climate change, digital transformation and healthcare services. It will also include funding for administrative-territorial reform, raising productivity, consolidation of higher education institutions, strengthening the combating of shadow economy and economic crime. One of the main precondition is that the planned investments must be linked to reforms.

The discussion was moderated by Vladlens Kovalevs, Managing Partner of VA Government.

We are grateful to VA Government for co-hosting the discussion.

Gatis Eglitis, Member of the Parliament, Chairman of Saeima’s Financial Sector Supervision Committee
Mr Eglitis is a member of the New Conservative Party - the largest party in the Latvian government coalition. He serves as deputy chair of the European Affairs Committee, has been appointed by the Latvian Parliament (Saeima) to oversee financial sector and implementation of Moneyval recommendations, and sits on the influential Saeima Budget and finance committee. Prior to Saeima work, Mr Eglitis served as economic advisor to the PM Straujuma and deputy PM Ašeradens, following an 8-year career in the European Commission (DG ECFIN). Mr Eglītis has also served in the Latvian Foreign Affairs ministry in the security policy and foreign economic relations departments. Mr Eglitis has a master's degree from the Johns Hopkins University in Bologna, the Vienna Diplomatic Academy and a bachelor's degree from the Stockholm School of Economics in Riga. Mr Eglitis resides in Riga.

Arturs Toms Pless, Minister for Ministry of Environmental Protection and Regional Development
Mr. Pless has experience in municipal work. From June 2017 to October 2018, he fulfilled the duties of Member of the Bauska municipality council. Riga Technical University gained a bachelor's degree in transport, a master's degree in urban and regional engineering. In the youth exchange program he has also studied at the Danish Technical University. Mr. Plešs was born Jan. 4, 1992 in Bauska. He has become the youngest minister of the government and is one of the youngest ministers in Latvia's history.

Moderator:
Vladlens Kovalevs, VA Government
Mr. Kovalevs is Managing Partner at VA Government, a government relations and public affairs firm. As a partner at VA Government, Vladlens provides counsel to his clients on political, regulatory, and public issues connected to their respective advocacy efforts. Prior to founding VA Government, he was awarded the Baltic-American Freedom Foundation scholarship and was stationed at a government relations firm Cassidy & Associates in Washington, D.C.
Vladlens has been involved in the assistance of multiple businesses in the tech, financial, FMCG, pharma, and defense sectors. His specializations include government relations and campaign management, as well as international communications. Vladlens holds a BSc degree in Economics and Business from the Stockholm School of Economics in Riga and has completed Public Affairs and Advocacy Institute at American University in Washington, D.C.
Vladlens is a Co-Founder of a non-profit Global Shapers Riga by the World Economic Forum, currently, pro bono advising one of its spin-off social projects #Neklusē.

The event is co-hosted by